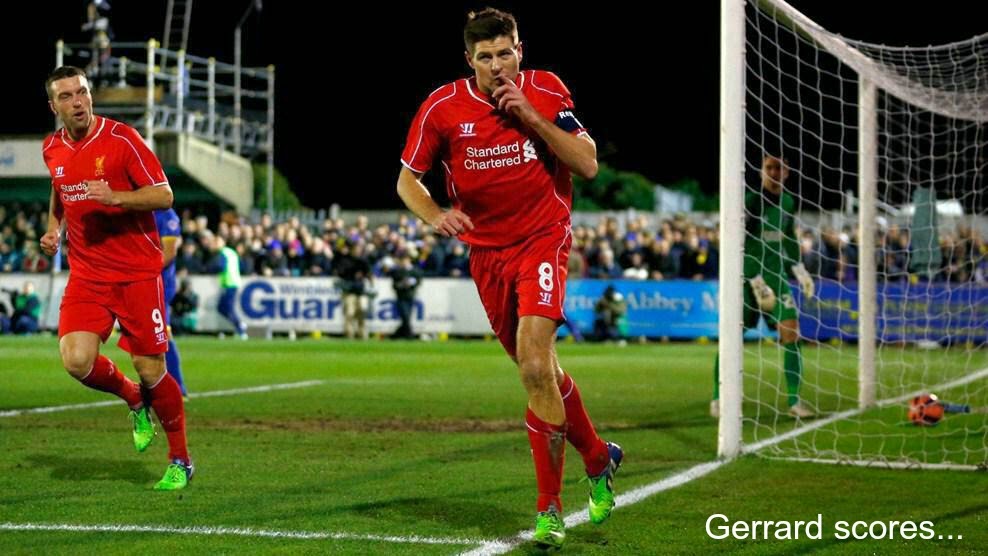 Liverpool put themselves through to the next round of the FA Cup on Monday night as a brace from captain Steven Gerrard ensured the Reds would go on to face Bolton Wanderers. In his first game after announcing he will leave Liverpool Football Club, Gerrard took control of the game being clinical where others failed.

It took Liverpool just ten minutes to get off the mark in the game. Despite an early bright spell from Wimbledon, the Reds managed to convert via a Steven Gerrard header in the centre of the box. He was assisted by Manquillo.

It was a set up for Liverpool that involved a striker, something I am always crying out for. More importantly though, it involved Gerrard sitting behind the striker, a role he relishes in. Whilst Lambert was ineffective, the captain made the most of his chance in a more attacking role than he has been used to of late.

For Wimbledon all eyes were on their big man up front; Adebayo Akinfenwa. For a man of his stature he doesn't half get about and he was certainly causing problems for a shaky Liverpool defence. Set pieces for the Reds have always been an issue and when you have a player like Akinfenwa wrestling for the ball, it's easy for things to go wrong and quickly.

At 35 minutes, things did go wrong for Liverpool. Simon Mignolet completely and utterly lacking in confidence failed to punch the ball clear and despite a goal line clearance after a combined effort from Lucas and Skrtel, the ball eventually splayed out into the melee and allowed Akinfenwa to get his much sought after goal. A Liverpool fan as a boy, he must of been chuffed to bits to bag that.

Going into the second half it was clear that the Reds would need to create something a bit different in order to break Wimbledon down. Whilst Markovic and Coutinho made weaving and pacey runs, it was predictable for the home side and they stemmed the flow on several occasions.

As the second half continued with no breakthrough it was Liverpool who once again found a lifeline. A free kick awarded to the Reds won by Philippe Coutinho allowed Steven Gerrard to set up his sights. His resulting free kick was a beauty and as it neatly swooped its way into the back of the net it left both fans and commentators asking the question again about Gerrard's decision to leave.

Right or wrong decision for the right or wrong reasons, Gerrard had proven once again how much we rely on him. He of all people would love to end his career at Liverpool in an FA Cup final and thank god he helped us through to the next round!

In the latter stages of the second half Brendan Rodgers finally introduced Mario Balotelli. It's no secret how much I want him to do well and despite the fact he never got on the score sheet he immediately got stuck into the game and created more in his 15 minutes that Rickie Lambert did the whole game.