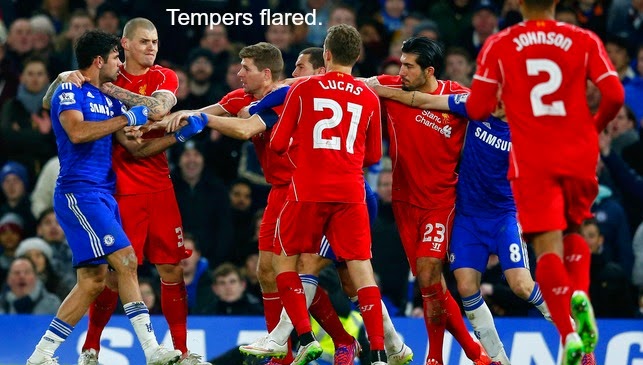 Liverpool suffered an agonising loss at the hands of Chelsea on Tuesday evening after a hard fought performance at the Bridge ultimately led to nothing. The Reds allowed early chances to go begging and whilst they held their nerve for the 90, Ivanovic broke hearts three minutes into extra time with a header from a set piece.

The first talking point from the game surrounded that man Diego Costa. He's the kind of player that you cannot stand when he's in an opposition shirt but it's hard to argue that you wouldn't like him playing for your own team. Nevertheless the incident at 12 minutes was unforgivable and Costa was extremely lucky to remain on the pitch.

A deliberate stamp on Emre Can right in front of an applauding Jose Mourinho went completely unpunished. I hate dwelling on decisions and "ifs" and "buts" however you can't help but feel it would have been a totally different game for Liverpool with Chelsea down to ten men so early in the game. It has since come out today that Diego Costa has been served a ban which he may yet appeal but that's no bloody use to us now is it?!

Liverpool created several chances in the first half of the clash but as always no player in a Red shirt could quite find the finish. A break from Raheem Sterling and Steven Gerrard is one that particularly sticks in the mind, if only Raheem had laid the ball to the captain things could have been so different.

Sterling wasn't the only player throughout the game though showing signs of selfishness or making the wrong decision. What should have been an easy header later in the game from Jordan Henderson was sent wide and Philippe Coutinho, Mario Balotelli and Rickie Lambert were all guilty of completely missing the target and wasting opportunities.

The annoying thing for Liverpool was that they played really well. The Reds applied constant pressure with Chelsea failing to trouble Mignolet really until very late on. When Mignolet was called in to action, what a game he had. The keeper has been on the end of a lot of stick lately (I hold my hands up to it too) but he made some superb saves on Tuesday night and kept us in with a shout.

Talking points surrounding refereeing decisions soon revolved around Diego Costa once again when he followed up his deliberate stamp on Can with a deliberate stamp on Skrtel. The pair had been getting in each other's faces throughout the game and to be fair how Chelsea were not awarded a penalty for Skrtel's challenge on Costa I will never know. Sometimes you get the decision, sometimes you don't, we may have been lucky to have not gifted Chelsea a peno but they were thanking their stars with Costa not being given his marching orders.

I was extremely surprised to see Mario Balotelli chucked into play by Brendan Rodgers and whilst 90% of my Twitter feed cannot stand the bloke and thought he did shite I found myself being a bit more appreciative once again.

Yes it was an average performance but he brought some movement and quality passes into the game, some skill and ingenuity. "Mario, moving?!" I hear you say... Several naysayers were quick to shout that Balo was "lazy" last night but whilst I will give you most of your criticisms, one thing he definitely was not last night was "lazy".

As for the goal, there are a lot of people blaming Mario for it. Of course, because it's all his fault innit? For me, a striker no matter what his build should not be instructed to mark one of the most prominent aerial threats. Balo was part of a zonal system that apparently meant Glen Johnson could just wander around and do what ever he wished until danger arose and it was too late.

Fact is, it was an easy header for Ivanovic and of course it shouldn't have been that easy but Chelsea ultimately took their opportunity whilst Liverpool were left looking back on all their missed chances.

We never gave up and played to the whistle but the Reds just couldn't find that all important goal to take it to penalties. This game has just highlighted the importance for Liverpool to convert their chances and I can only hope that this will begin to resolve itself with the reintroduction of Daniel Sturridge.


@LFCKirstyLFC Costa should have walked after 12 mins that would have changed everything poor poor decision Ref must have seen it .
— Stewart (@sc_soly56) January 28, 2015

@LFCKirstyLFC we just lacking a clinical finisher once @D_Sturridge comes back this team is going to another level
— Mr_G (@Mr_G_YNWA) January 28, 2015


Next up for Liverpool is West Ham.