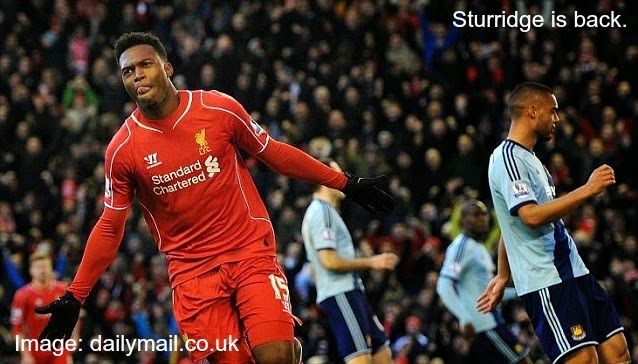 Liverpool notched up a 2-0 win over West Ham on Saturday as youngster Raheem Sterling found the back of the net followed by a returning Daniel Sturridge. The long awaited return of the number 15 could not have been more perfect, a standing ovation as he prepared to enter play on the touchline was quickly followed by rapturous celebration as he found Liverpool's second goal of the game in style.

The first half for Liverpool was not brilliant in all honesty. The Reds were creating a lot of movement and West Ham offered little threat however we couldn't seem to find that final killer ball. Breaks from the likes of Coutinho and Sterling almost had the Hammers in knots particularly after a link up early on between these two.

A lovely back heel from Sterling fell for Philippe Coutinho, squaring up for the shot it looked like the perfect chance to take the lead however the Brazilian was denied by Adrian.

Another incident in the first half involving Sterling occurred when he appeared to have been taken down in the box. The ball however remained in the danger zone and this time it was Lazar Markovic in a dangerous position. Lazar however should have done a lot better and completely fluffed his shot sending the ball wide.

Things would improve for the Reds in the second half when after just five minutes Raheem Sterling finally found the back of the net. A cross from Alberto Moreno found its way to Sterling who laid the ball back to Coutinho, his teammate then fed the ball back to Sterling and with a confident finish the Reds were 1-0 up.

It was a well deserved goal for Sterling who as always had been our most effective player.

West Ham continued to struggle in the second half and it was possibly understandable considering the injury worries that were being created within this game for them. Things were difficult from the whistle for the visitors and it just got worse as the game went on.

A shot from Valencia soon after Liverpool's first goal was one of few chances for the Hammers and it wouldn't be long before they were punished again by the Reds.

Just before the 70 minute mark and having only been on the pitch for 10 minutes Daniel Sturridge decided it was time to let everybody know that he was back. Another break involving the brilliant Coutinho allowed him to play a ball out to Daniel Sturridge who was on the right side of the box. Oozing confidence Sturridge then took his chance from a tight angle and finished beautifully to score Liverpool's second and secure the Reds all three points.

It was absolutely fantastic to see Sturridge back but to see him score as well? Bloody brilliant! I was concerned that it might take a while for him to find his feet and get back to scoring ways which can then create all sorts of problems confidence wise for a striker but he seemed destined to score as soon as he entered play on Saturday. Oh and I cannot explain how happy I am to see us playing with a proper striker! We look a totally different team with him in it.

Late on for West Ham it looked as though they may have found a consolation goal when a ball was turned into the back of the net after a corner. The referee however decided that Simon Mignolet had been fouled and therefore the goal was not given.

@_TheLiverBird Sterling absolute class. Sakho is vital to the back four. Nice to see a win without reliance on gerrard
— Brian LFC (@jagusak) January 31, 2015

@LFCKirstyLFC the importance of Sakho and Lucas are the ying to Sterling and Coutinho's yang
— Lucas Mathew (@TheBlink44) January 31, 2015