Not Quite The Perfect Ending 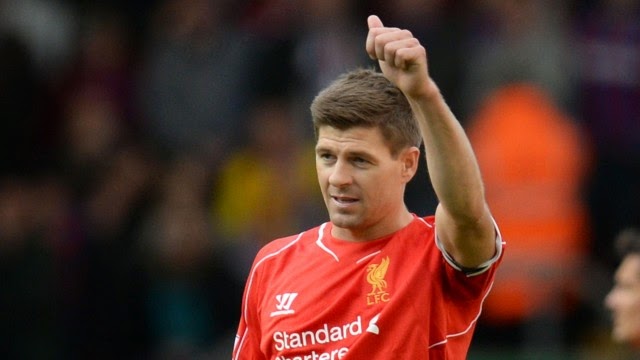 It wasn't quite the fairy-tale ending that Steven Gerrard would have dreamt of at Anfield on Saturday evening but the Liverpool captain was given an overwhelming reception from his supporters, his team mates, opposition fans and admirers all over the world. It was an emotional day for the captain but unfortunately the Reds couldn't pick up a win to complete the number eight's last performance in front of the Kop.

It was a poor performance from Liverpool who began the game under building pressure from Crystal Palace. For the first 15 minutes or so the Reds had some decent bouts of possession but they were failing to create anything meaningful with it.

Crystal Palace on the other hand were looking more and more dangerous with Bolasie at the head of their attacks. At 25 minutes though against the run of play, Liverpool had found the back of the net thanks to Adam Lallana. Lallana remained strong in the build up and for me it looked like he'd taken the ball too far however the ex Southampton man was confident and finished well to the top left corner putting Liverpool into the lead. Lallana immediately ran to Gerrard to celebrate.

Liverpool didn't fully capitalise on their lead but Brendan Rodgers' side did begin to create some more chances from the likes of Philippe Coutinho and Raheem Sterling. For me, even being ahead in the game I still found myself wishing Rodgers would play some strikers but today was about Steven Gerrard, I didn't have time to run my usual moan about the tactics and line up.

It was evident though that Liverpool were once again struggling to find a final product. In the meantime Crystal Palace grew more and more confident. At 42 minutes Alan Pardew's side were awarded a free kick in a dangerous area. Jason Puncheon was the man to step up, hiding his conversation to fellow team mates by putting his head in his shirt. His ploy worked, Liverpool were left dumbstruck as Puncheon's perfectly placed free kick put Palace back in the game.

As the second half began Crystal Palace were quick to put Liverpool on the back foot once again, scoring after just 15 minutes. Zaha had only been on the pitch for a matter of seconds but he converted easily for his side. For me, it was an offside goal but we couldn't really complain too much I felt as early incidents in the box involving Skrtel could have easily led to a Crystal Palace penalty. Palace were the better team as well and so it was only going to be a matter of time before they found another goal.

Rickie Lambert and Lucas Leiva entered play at 65 minutes for Liverpool as Rodgers opted to push Gerrard forward. Gerrard obviously would of been desperate for a goal in front of the Kop and whilst the move did improve the run of play for the Reds slightly there were still no meaningful chances.

At 90 minutes Crystal Palace sealed the deal. A challenge from Lucas on Zaha lead Jonathan Moss to award a penalty. The only problem was that the foul was outside the box, it wasn't a peno. Glenn Murray converted for the away side as they secured all three points.

It was hard to think of anything other than the departing Gerrard in this game but you have to feel disappointed with yet another poor performance from Liverpool. I'd pretty much given up several games ago but the more I dwell on our performances this season, the more I worry about next season. This transfer window needs to be absolutely spot on and if Brendan Rodgers remains in charge he needs to field a team to their strengths and remove some of the stubbornness that has plagued this campaign.