Brazilian Masterclass At The Etihad 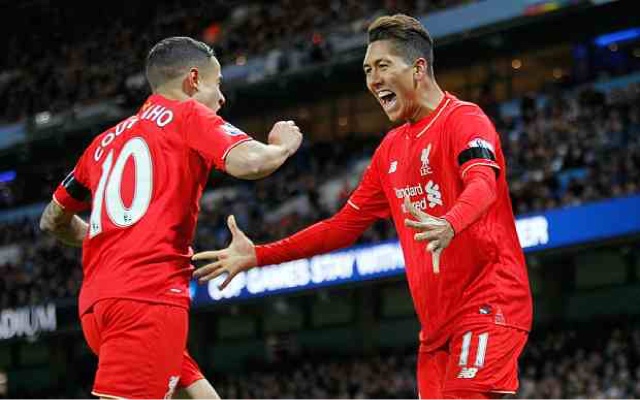 Image via telegraph.co.uk
Liverpool picked up a massive result against Manchester City on Saturday evening as Klopp’s side scored four goals at the Etihad. It was a superb result for the Reds who made mince meat of City’s weakened defence.
Jürgen Klopp made a bold decision to select an XI without a recognised striker and I can't deny that the set up worried me initially. I guess I'm just a traditionalist at heart and I get frustrated when there's no striker on the field however, this line up worked well against Chelsea and it proved to be a stroke of genius against City too.
Liverpool’s first goal of the game came just seven minutes into the first half. A last ditch attempt from Sagna to hack Coutinho off the ball resulted in failure as the magic number 10 maintained possession and set off towards goal on the left wing. A timely pass to Firmino allowed his compatriot to whip in a cross only for Mangala to bumble home an own goal. It was comedic to be fair and the City defence were definitely struggling to adapt after the injuries affecting their back four.
It may have been an own goal but it was no coincidence that the Reds were in the lead, they were playing City off the park and pressure continued to mount for Pellegrini’s side who failed to offer any real threat in the opening stages of the game.
At 22 minutes, Liverpool had found their second of the game and it was Coutinho and Firmino linking up yet again. Firmino flew through the City defence with ease and placed a perfect pass to Coutinho who tapped home his fourth goal in five fixtures against City.
Being 2-0 up at the Etihad after just 20 minutes is not something that happens, certainly not for Liverpool who haven't picked up a win at the ground in the league since 2008. The show wasn’t over yet though and Klopp’s side continued to boss the game as they searched for a third goal.
The Brazilian pairing of Coutinho and Firmino were involved once again for the third. This time the play was initiated after a cheeky back heel from Emre Can, the pass was definitely onside and picked up by Coutinho who left Hart with no chance as he swept the ball across to his teammate. Firmino slotted Liverpool’s third goal of the game home after just 30 minutes.
The pairing of the two Brazilians and the way they played on Saturday for me proves how vital a change in manager was for Liverpool. Yes, tactically Klopp has applied his changes but it's clear to see that the team want to play for their manager, they are content and it shows in their game.
Just before the half hour mark the influential Aguero tried to spoil the party for the Reds. It was a cracking goal from the Argentinian who took his effort from outside the box and finished in style.
The second half began with a bit of an edgy feel because it felt as though Man City may just be able to get back into this game. The feeling wasn't helped when James Milner decided it would be a good idea to slide a back pass intended for Mignolet straight into the path of Raheem Sterling. Thankfully for the Reds, Sterling for some reason opted not to shoot and instead passed to Aguero but Mignolet completed the save.
With 15 minutes left of the match Christian Benteke got his chance to feature in the game by replacing Roberto Firmino. He was quickly involved too after breaking with two defenders on his case, standing strong he got one on one with the keeper but his effort was saved.
Then, at 80 minutes, something truly magical happened. Those who know me will know I have an obsession with defenders and also that I love Martin Skrtel. Almost every week I have a quid on him to be first goalscorer and a quid on him as last goalscorer. Over the years I've seen odds of 12/1, 20/1 and even 25/1 but yesterday when I logged into my Paddy Power app I scrolled through the goalscorers to see Skrtel at 40/1! “Ridiculous!” I thought and I immediately put my quid on. So you can imagine what happened when he scored.
I was already elated at the fact we were 3-1 up at the Etihad but when that ball fell to Skrtel I thought “oh jeez its on his foot, he only scores with his head”. I was certain he was gonna smash the shot into the stands but instead he struck a half volley that any striker would envy. I went bloody mental! Jumping round the pub smacking my brother shouting “I've won forty effin quid!!!” Haha it was absolutely quality.
What a game, what a result, what a team performance! Klopp's favouring of a pressing game was evident on Saturday and City no matter how hard they tried were not going to get any time on the ball. What was even more hilarious was the fact that Raheem Sterling was supposed to be the headline maker for this one and he did absolutely nothing.
I asked you for your thoughts on the game and here are a few of the tweets I received: