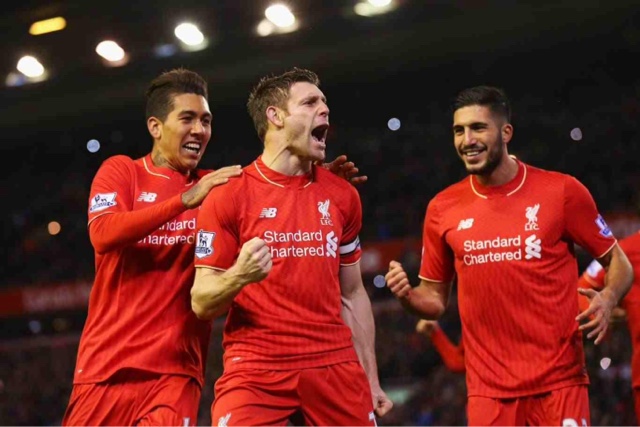 Image via standard.co.uk
Liverpool just about managed to get the better of Swansea at Anfield on Sunday as Jürgen Klopp had to settle for a penalty to give his side all three points. It proved to be a fruitful weekend for the Reds though who capitalised as some of the big boys dropped points.
There was no Coutinho or Lucas for Liverpool but positively both Daniel Sturridge and Jordan Henderson appeared on the bench. The game began with a minutes applause for Gerry Byrne who sadly passed this week.
The first half although not exactly brilliant did fall into the Reds' hands. An initial break into the box from Jordan Ibe almost ended in a goal after Bartley nearly turned the ball into the back of his own net.
Benteke was also causing hassle for Ashley Williams, the Swansea player also became frustrated at one stage when it appeared Benteke had dived in order to try and gain an advantage on the edge of the box. Watching it back it was a bit of a silly move from the striker who isn't exactly known for his theatrics.
As the first half trundled on it became clear that the Reds did not have any sort of hold on this game and the difficulty of playing at home was still an existing issue. For me, one thing I quickly noticed was the effect that the missing Lucas had. He gets a lot of stick Lucas and I honestly feel he is vastly under appreciated, his presence in midfield keeping things ticking along and his confident distribution within the centre of the pitch was sorely missed for me.
Can didn't play badly in the role but I prefer Can with a bit more freedom and some may not agree but Emre wasn't passing or aware of potential attacks as much as he should of been in my opinion.
The second half saw Swansea increase their pressure but not before Liverpool got themselves on the scoresheet. A penalty was awarded to the Reds after a hand ball from Taylor in the box. It was a pretty harsh decision to be fair as it was clear he had no real intentions to handle the ball, however when you turn your back on the ball in the box you are surely asking for trouble?
Milner stepped up for the penalty and finished high into the middle of goal to put the Reds in front. Jürgen Klopp couldn't even watch the spot kick and instead opted to look at the fans reaction.
The introduction of Henderson and Sturridge did little for Liverpool's performance as Swansea continued to apply pressure on goal. The Reds looked very shaky at the back and for a while it looked as though the Welsh side would equalise. Despite a good period of pressure though, Monk's side failed to find the back of the net and Liverpool walked away with their first home win under Klopp in the league.
Next up for Liverpool is Southampton in the League Cup.
James Milner Liverpool Match report Premier League Swansea
Follow @lfckirstylfc
FcTables.com
FcTables.com