on February 26, 2016
The Reds sealed their place in the last sixteen of the Europa League on Thursday evening after a James Milner penalty, less than five minutes in gave them their only goal. Despite a lively performance from Jürgen Klopp's side and some key players in the starting XI, the Reds couldn't increase their goal tally. 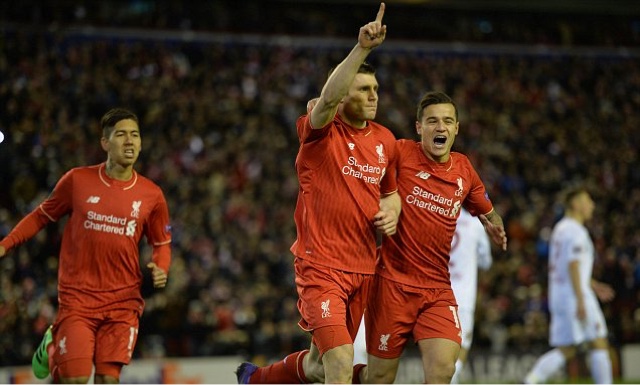 Image via daily mail.co.uk: James Milner celebrates.
The Augsburg fans were raising the decibels even prior to kick off at Anfield and their plentiful support definitely appeared to bolster their side through some of the more difficult patches in the game. Luckily for the visitors though, as has been the case for a while now with Liverpool, Klopp's side just can't seem to find that clinical finish. Daniel Sturridge, Roberto Firmino and Philippe Coutinho were all displaying some brilliant trickery in and around the box but when it came to that final product? Nothing.
The one chance Liverpool did convert of course was their spot kick after five minutes. I personally thought it was quite a harsh decision simply because the offender was underneath one of his own players in the air but I suppose if you are flailing your arms about like that then you are asking for trouble. James Milner stepped up and calmly converted a very important goal for the Reds.
A back pass from Lucas early in the first half almost sent hearts racing as Augsburg looked to find an equaliser but to be fair to Mignolet he dealt with the situation well. Let's not forget Augsburg had the upper hand here really, despite being down, one goal for them with the away goals rule would have been enough to see them through.
The Reds battled on though producing a second half of similar intensity to the first, the fresh legs of Divock Origi went some way to helping Liverpool truly cement their lead but still no second goal was found. Augsburg towards the end of the game went a whisker away from equalising but fortunately for the Liverpool things didn't quite sway in favour of the Germans.
The win for Klopp's side sees them through to the final 16 in the competition and with the draw taking place on Friday afternoon there are no longer rules involved about which teams are able to face each other meaning a Liverpool V Manchester United tie in Europe could actually be a possibility. This is the first time Liverpool have got through to the last 16 in Europe since the 2010/2011 season.
Next up for the Reds though is a massive, massive game; the league cup final against Manchester City at Wembley. Come back here to The Liver Bird for a full match preview on Saturday afternoon!
Augsburg europa league James Milner Jürgen Klopp Liverpool FC
Follow @lfckirstylfc
FcTables.com
FcTables.com