Comfortable Win Over Stoke For Reds

on April 11, 2016
Liverpool manged to put four past Stoke on Sunday afternoon as Jurgen Klopp fielded a somewhat weakened side with one eye firmly on the second leg of his team's Europa League quarter final with Borussia Dortmund. 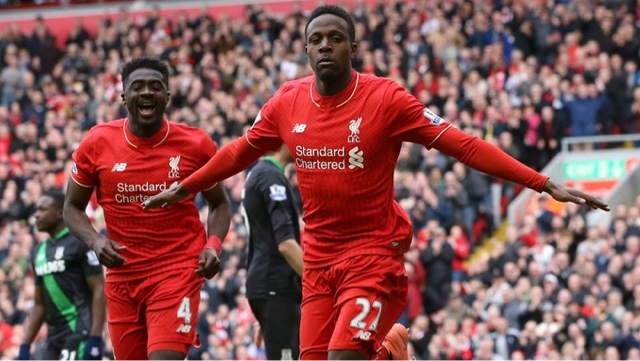 Image via itv.com: Divock Origi celebrates with Kolo Toure
Unfortunately I didn't see the game so this post will be very thin on the ground with just a few talking points I picked up from the full highlights.
Strong Squad?
After making seven changes to the side against a team like Stoke it's quite hard to believe that Liverpool managed to bag four goals to be honest and it got me thinking... is our squad actually a lot stronger than we give it credit for?
With players like Joe Allen and Sheyi Ojo featuring heavily on Sunday, maybe we do have some options? I'm not saying we have a top class squad by any means because let's face it some of these players are just bang average and we definitely need to invest in the summer. However, it's nice to know that alternate options are available for Klopp and can event work effectively.
For me, Klopp had to field a weakened side on Sunday because our best chance of getting into the Champions League is not via finishing fourth, that pipe dream is over, the only chance is to get past Dortmund and win the Europa League!
Daniel Sturridge
It was great to see Daniel on the scoresheet and even better to see him so thankful to youngster Ojo for a wonderful cross. Sturridge needed that goal to boost his confidence I feel and now alongside an in form Divock Origi, manager Jurgen Klopp has a really nice problem facing him in terms of striker selection. This brings me nicely onto the next point...
Should we consider playing two up top more often?
It's a system I've always liked and enjoyed taking advantage of but I can understand why many managers prefer one man leading the line. On Sunday however Origi and Sturridge were together for 45 minutes and for me the partnership worked brilliantly. Origi's work ethic cannot be faulted but Sturridge must also be praised for his awareness and link up play. It's a partnership I'd like to see more of but I'm not sure Klopp will be willing to change tactics against Dortmund on Thursday!
P.s. What a stike from Alberto Moreno eh?!
Apologies for the short post folks, normal service resumed on Wednesday with a full Dortmund preview!
Alberto Moreno Daniel Sturridge Divock Origi Liverpool FC Match report Premier League Stoke
Follow @lfckirstylfc
FcTables.com
FcTables.com