on April 21, 2016
1) Everton really are shocking aren't they?
No offence to Everton... Actually yes, offence to Everton, they were bloody terrible last night. I know they've been having a dodgy season but I never expected the Merseyside derby to be so heavily one sided! 33 attempts to their 3 or something was it?! Unbelievable!
Obviously the sending off didn't help Martinez's side but they can't claim they were offering much before Funes Mori saw red. The Everton back line was practically non existant and apart from a few flashes from the likes of Ross Barkley I am seriously struggling to find any real positive for them. 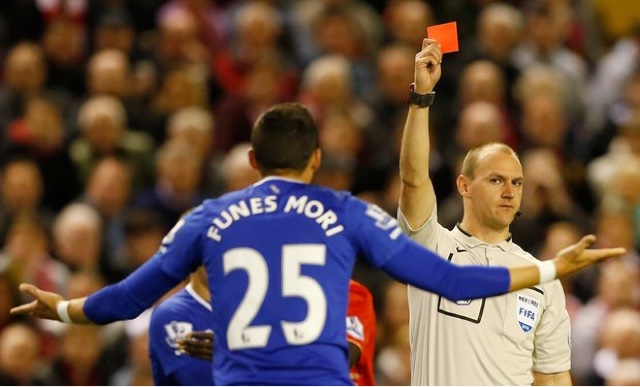 Image via the guardian.com
2) Divock Origi's injury made me panic
If you'd have told me at the start of the season that a crunching tackle on Divock Origi would cause me to have a mini episode I would of laughed in your face. The Belgian just didn't look like he was going to find his feet in the Premier League but as we have all seen this season he has earnt his spot in the starting XI.
It was a terrible challenge and the look on Origi's face suggested it was a serious one. Even knowing we had a superb back up in Daniel Sturridge the thought of having no Divock to call upon as we enter crunch stage in the Europa League was a frightening one. I just hope the injury is in fact only a sprained ankle as the press now seem to be reporting.
3) Sakho is a legend
It's no secret that I'm one of few people who are not entirely convinced by Sakho's defensive abilities at the moment but as each game goes by he stems my doubt. He had another brilliant game on Wednesday evening but the thing I can't deny about Sakho is that he's an absolute top bloke.
You can see how influential he is within the team and how well he gets on with his counterparts. Running over to Kolo Toure being chased by the rest of the side after scoring was just fantastic to see. You can always rely on Sakho for some proper passion, just what you need in a Merseyside Derby!
4) No dubious goals panel is going to award a goal scored via the arse
After stepping up to take the place of the injured Divock Origi, Daniel Sturridge was predictably immense, he's a real quality forward and bagged himself a goal just after the hour mark.
Despite his genius however I find it hard to believe that his ludicrously cocky claim on Philippe Coutinho's strike will make it past the dubious goals panel. Only Sturridge would have the cheek to claim a goal scored with his cheek!
Coutinho's face said it all. "Jog on!"
5) Smells like team spirit
Finally I think the real thing to take from this performance was the visible team spirit. To have beaten Everton so emphatically with four different goalscorers doesn't happen everyday but to do so while having a manager on the sidelines laughing at Lucas for having a pop at goal? Just priceless.
Jürgen Klopp clearly has a special bond with his players and it's clear that the team are bonding far better under the German compared to the Brendan Rodgers days. I just hope they can go on to win the Europa League together now but if not I am massively excited for next season!
Coutinho Daniel Sturridge Divock Origi Everton Liverpool Merseyside Derby Sakho
Follow @lfckirstylfc
FcTables.com
FcTables.com