on April 13, 2016
A fantastic win over Stoke at the weekend gives Liverpool a huge boost going into this important fixture with Klopp's ex side Dortmund as the Reds look to progress to the semi-finals of the Europa League. The manager also has a tough decision to make up front as he must choose between Divock Origi and Daniel Sturridge, many are predicting the former will get the call. 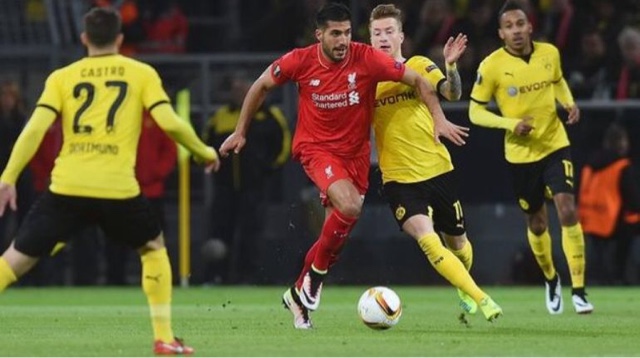 Image via dliga.com
Injuries
Injuries for Liverpool remain pretty much in the same state as they were for the first leg of this tie except of course that captain Jordan Henderson will not be available. Lucas has made a return and so may get a chance to feature at some point but there will be no sign of Christian Benteke who was fighting a losing battle to start ahead of Origi or Sturridge anyway.
For Dortmund, they have received a boost with some key players coming back from injury. Only Joseph-Claude Gyau and Neven Subotic are unavailable for this fixture.
Previous Meetings
The  last time the two sides met was of course just last week in the first leg that ended 1-1. It was a solid performance from Liverpool and a lot better than most fans were expecting. In fact Divock Origi very nearly scored a second in the game which could have gifted the Reds an all important lead in the tie.
The sides as discussed in the original preview have only met on a total of three occasions prior to this season and to be fair, Liverpool have always provided strong opposition to the German might.
Form
At home, the Stoke win gave Liverpool only their second win in five Premier League games at Anfield. It's no secret that Klopp has struggled with his side on their own turf but things have been improving of late. The Reds have only lost one game during the same time period at L4.
In terms of Dortmund's away record? The German side have lost just one in their last five trips away from home in the Bundesliga. However they only managed to collect a draw at Schalke this weekend, perhaps denting their confidence as they lost ground on Bayern Munich.
Betting
Liverpool are currently 15/8 to win on Thursday evening with Paddy Power. To take advantage of this offer simply click the image in the sidebar, deposit £10 and place it all on one bet to get £30 free to play with.
If you fancy Origi to bag another goal his odds for first goalscorer are: 11/2 and he's at 6/4 to score anytime.
The game is obviously tightly poised with the advantage of an away goal for Liverpool but anything could happen on Thursday evening. I'm so excited for the game! Enjoy the match folks, wherever you are watching!
Borussia Dortmund Daniel Sturridge Divock Origi europa league Jurgen Klopp Liverpool FC match preview
Follow @lfckirstylfc
FcTables.com
FcTables.com