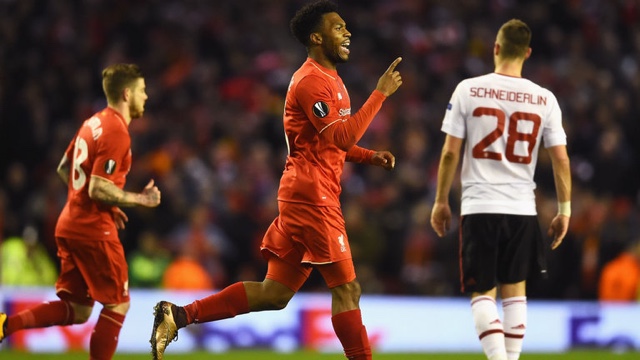 Image via sky sports.com
Whenever Liverpool face Manchester United, it is always set to be a massive game but throw in the added element of the first ever meeting between the sides in Europe? Well you have all the right ingredients for an historic fixture. Liverpool just had to win this one, if there's one thing the Reds still hold over their rivals it's European prowess.
Thankfully Daniel Sturridge and Roberto Firmino ensured kopites could continue to boast about their glorious history as Manchester United put on an extremely poor performance at Anfield.
2. Manchester United 0 Liverpool 3 / 16th March 2014
Goalscorers: Steven Gerrard (penalties x2), Luis Suarez
What's a match against Manchester United without a Steven Gerrard penalty? The captain was notorious for winding up the opposition in this fixture and on several occasions Gerrard turned this in his favour.
The two penalties in 2014 set the tone for the game with Luis Suarez sealing the deal. A 3-0 win at Old Trafford isn't something you see everyday and despite two of the goals coming from spot kicks, this remains a favourite result of mine.
3. Liverpool 2 Manchester United 1 / 28th January 2012
Goalscorers: Daniel Agger and Dirk Kuyt
This game goes down as one of the great highlights for the return of Kenny Dalglish. The King took his place on the touchline opposite his old pal Fergie for this one. A Daniel Agger header opened up the scoring just after 20 minutes but Ji-Sung Park found an equaliser shortly before the end of the first half. 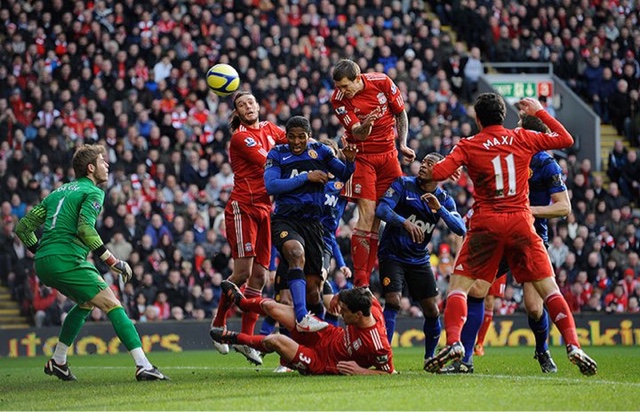 Image via the guardian.com
From there on out United seemed dominant and it looked as though Dalglish would have a bitter pill to swallow, however Dirk Kuyt saved the day with a great strike at 87 minutes giving Liverpool the win.
4. Liverpool 3 Manchester United 1 / 6th March 2011
Goalscorers: Dirk Kuyt hat-trick
Dirk Kuyt will forever go down in Anfield history, a true fan favourite, the Dutchman had several iconic moments in his time as a Liverpool player. For me, top of the list is definitely his hat trick against Manchester United. 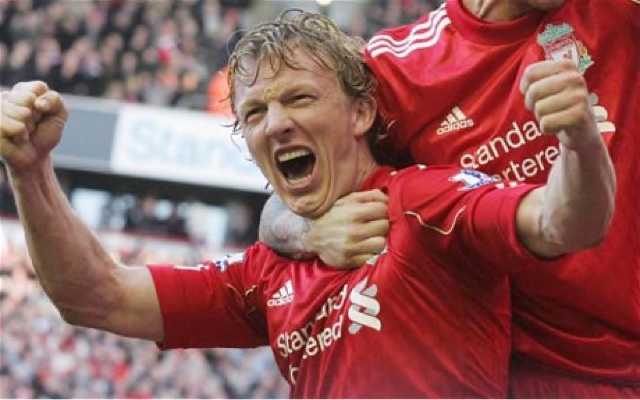 Image via the telegraph.co.uk
I remember it vividly as I was at work on the day, (I take bets in the corporate areas of Molineux stadium for those who don't know) I was having to watch the match via multiple screens and angles as I travelled between rooms. When Kuyt scored his third  I could no longer hide the excitement and was dancing around with my clipboard in the air haha! That was the day the customers became fully aware of my football allegiance I think. Absolutely brilliant game.
5. Liverpool 2 Manchester United 0 / 25th October 2009
Goalscorers: Fernando Torres, David N'Gog
The year 2009 became a special one for kopites, especially when it came to facing Manchester United. For me, I will always remember this emphatic victory thanks to our goalkeeper Pepe Reina. 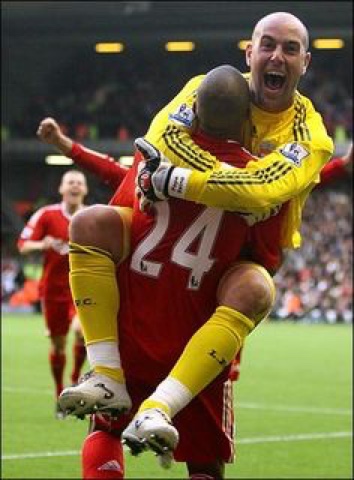 Image via huffingtonpost.co.uk
I will never understand just how exactly he managed to be the first player on the pitch to dive on his team mate David N'Gog who was at the other end?! He must have ran like an absolute mad man. The image above for me is one of the most iconic from our recent clashes with United.
6. Manchester United 1 Liverpool 4 / 14th March 2009
Goalscorers: Fernando Torres, Steven Gerrard (penalty), Fabio Aurelio, Andrea Dossena
It was a sunny afternoon in March, the Reds had travelled to Old Trafford and settled in for what feasibly could have been a very long day, but for whatever reason, the team that day had something special planned. For too long we had failed to get the better of United on their own turf, well this time it was going to be different.
Fernando Torres opened up the scoring after absolutely humiliating Nemanja Vidic and leaving him in a massive heap, ending with a beautiful finish to put the Reds in front. Vidic was one of several big United boys to boast about their chances prior to the match, so it was hilarious to see him brushed aside so quickly. He of course was sent off in that game too.
Steven Gerrard's penalty came next followed by his famous kissing the camera celebration. I couldn't believe what I was seeing, Liverpool just cruising at Old Trafford. 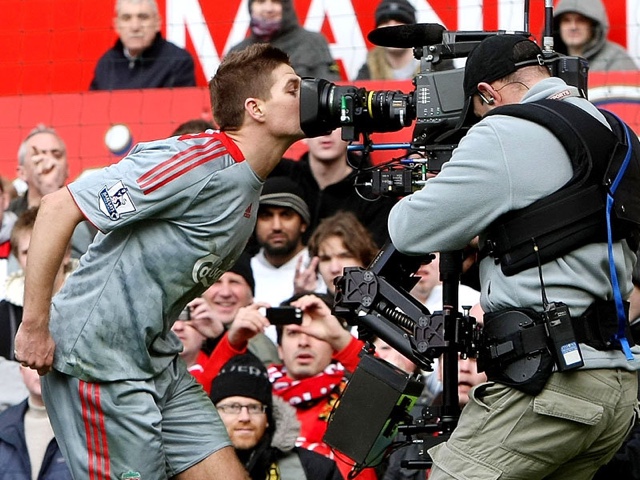 Image via squawka.com
Another poor decision by Vidic led to a free kick for Liverpool and Fabio Aurelio scored with a stunning effort. The game of course was completely put to bed when Andrea Dossena decided to have a mad fortnight scoring a looping shot over Van der Sar then scoring against Real Madrid, bloody crazy, the whole thing was absolutely crazy. This remains one of my favourite matches as a Liverpool supporter.
7. Liverpool 1 Manchester United 0 / 18th February 2006
Goalcorer: Peter Crouch
This match is often more of a forgotten win over Manchester United but it's worth noting that this was Liverpool's first victory over the Devils in the FA Cup in 85 years. A single headed goal from Peter Crouch after 19 minutes was enough to seal the deal for Rafa Benitez's side who then went through to the quarter final.
I'm feeling confident for Monday night, with the way we are playing at the moment and the fact that a win could take us joint top? I seriously think we're on for three points. Enjoy the match folks, wherever you are watching!
Jurgen Klopp Liverpool Manchester United match preview past meetings Premier League
Follow @lfckirstylfc
FcTables.com
FcTables.com