on March 22, 2017
So on Saturday 18th March I ticked off a major item on my bucket list, I got to see a live Serie A match. For those who don't know I've had a somewhat unhealthy obsession with anything Italian since I was a young kid. The obsession with Italian football in particular started when I was about eight or nine after my Mom brought me home a fake Totti shirt she'd picked up as a treat for me whilst shopping. I was a massive tomboy and so was obviously delighted at the purchase, though at the time, I didn't know an awful lot about calcio. 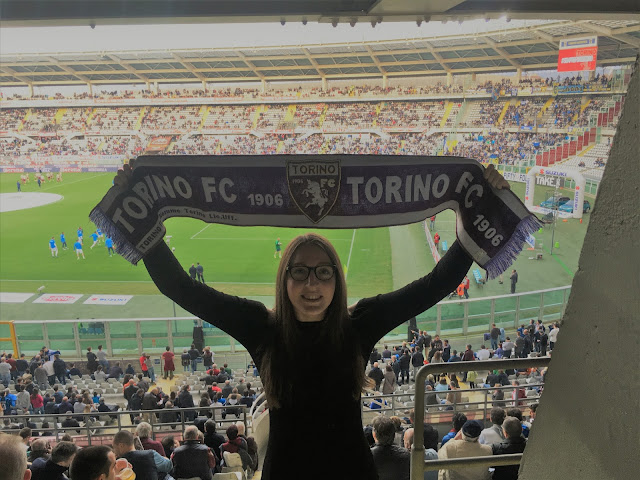 As I grew older I learnt more about the big Italian sides, AC Milan, Inter Milan, Juventus, Roma and so on. It was a certain club from Turin though that really captured my imagination.

A few years ago I purchased John Foot's brilliant 'Calcio' book - I would highly recommend to anybody who is interested in learning more about Italian football. In John's book I was fascinated by Torino's both tragic yet inspiring story. Torino share a tragedy unfortunately familiar to other clubs like Manchester United and Chapecoense after "Grande Torino" were killed in a plane crash. The flight was approaching Turin in poor weather conditions when it hit the Basilica of Superga.

After learning about the tragic fate of Torino's once unstoppable team I then went on to read The Day Italian Football Died by Alexandra Manna and Mike Gibbs. Another fantastic read and a very in depth take on Il Grande Torino prior to the terrible incident and covering what happened in the weeks and months afterwards. 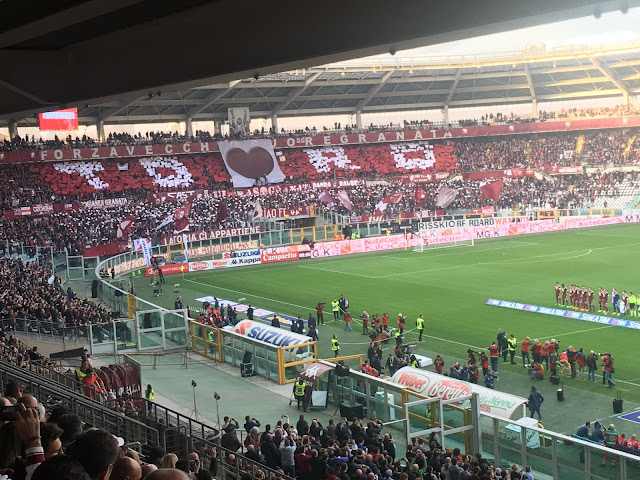 And so I decided to adopt Torino as my Italian side. I try my best to keep up to speed with news about the team and have their scores sent straight to my inbox every week. On Saturday, I got to see them in the flesh.

The build up to the match was brilliant, we were sat in the Tribuna Granata, close to the Curva Sud. The away fans (Opsiti) were sat just across the pitch from us while the main Curva Nord was to the left.

Prior to the match Torino have a cracking anthem which is sung emphatically by all the tifosi, in particular those sat in the Curva Nord. I didn't get a very good video on the day but the one below gives you a pretty good idea. The chanting and circling of their scarves in unison is a sight I'll never forget.

It was a cracking game at the Stadio Olimpico and myself and the fella celebrated like we'd followed the Granata for years when they netted their two goals. Unfortunately for the Englishman Joe Hart, he ended up being majorly at fault for Inter's two goals in the match. In the typical tale of a goalkeeper though he also pulled off some world class saves to keep his side in the match.

The atmosphere in the section of the stadium where we were sat was great fun, surrounded by not only Torino fans, we also had several Inter fans sat around us. While some stories of Italian football will have you believe all fans hate each other and it's dangerous to mix with the opposition, this good natured affair would suggest otherwise. Of course, none of the ultras would be caught dead doing such a thing but it was brilliant to be involved in such good natured banter. A young lad with his father in front waved his Inter flag high when Candreva found their equaliser, an elderly Torino fan voiceifoursely shouted "vaffanculo" at the referee after one too many poor decisions. It was both hilarious and brilliant.

A major bonus for me was that I put a quid on 2-2 n'all so the draw was both an eventful and fruitful one. The Torino side applauded their fans at the final whistle and we in the stands returned the favour, it was a solid performance from a team who on paper should have lost at the hands of Internazionale who were entering this game on the back of a 7-1 win.

I'll never forget the experience of watching a Serie A game, it's no surprise that when people get their first taste of calcio they only strive for more. My love for Torino has only grown stronger and I hope that one day I'll be able to watch them again.