The Italians know how to defend, but despite having a three-goal lead Liverpool should not take a leaf out of their book on Wednesday night. The Reds would have every right to play this cautiously but for me, the answer is all out attack. 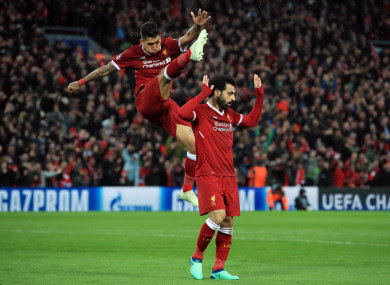 Roma's two away goals late on at Anfield last week added a few nerves in many fans hearts, it's amazing the difference a couple of goals can make. Should we be fearful? Certainly, we shouldn't take Roma for granted but at the same time, we have Salah, Firmino and Mane at our disposal.

I say we net a few more and put this game to bed, don't even give the Italians a chance to settle or grow into the game. Roma have played brilliantly in the Champions League this season, phenomenally well when you think they pushed Barca aside but could they deal with a 6-2 or 7-3 aggregate? I don't think so. An early goal from the Reds could really take the wind out their sails.

Liverpool suffered a blow after Alex Oxlade-Chamberlain picked up a serious injury in the first leg but other than that Jurgen Klopp should be able to field his favoured XI. Roma have no real injury worries aside from Kevin Strootman who will undergo a late fitness test.

The stats are also mainly in favour of the Reds, however, Roma are yet to concede a single goal at home in the Champions League so far this season. Despite that fact I just can't see them stopping Salah, I genuinely can't. The pressure will be immense, the atmosphere historic but I cannot see them stopping us from finding the back of the net.

Roma must keep a clean sheet and score three goals before anything even changes in this tie. We have to accept that the Reds have their weaknesses and if Roma exploit set pieces we could find ourselves in a sticky situation but for Roma to have any hope of going through they must come at us, come at us quickly and constantly.

This, in turn, will open up gaps, gaps that Salah, Firmino and Mane will more than happily take advantage of. On paper, Liverpool should seal their place in the 2018 Champions League Final tomorrow night. In heads and hearts they should be there too but you just never bloody know do you, football is a funny old game!

Enjoy the match folks wherever you are watching. As well as the desire to see Liverpool reach another Champions League final I also have two hotel rooms on the Wirral riding on this so let's hope we don't balls it up! (We won't. #ForzaLiverpool)

I leave you with one of my favourite tweets from today:

last week we gave 2 italians a lift to anfield. this week we went to his restaurant in rome.. this is what football is about @LivEchoLFC pic.twitter.com/icjsiitYpt
— lee grannell (@leelfcgrannell) May 1, 2018