I've been stupidly busy and tied up with switching jobs etc and I guess I'm learning that blogging is something I adore but that it's ok to blog less frequently.

Anyway, I figured what better way to round up Liverpool's 2019 than with a post after just watching us beat my future husband's team haha.

The Reds managed to get the better of Nuno's side with a slim 1-0 victory at Anfield on Sunday evening. While I feel Liverpool commanded the game in terms of possession and playing the ball out from defence, I don't feel we were entirely in control. 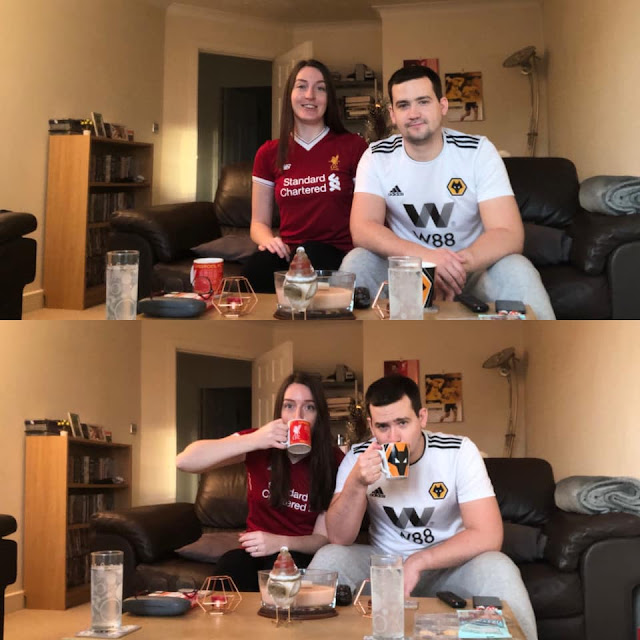 A weakened Wolves side after their emphatic win over Manchester City still posed a real threat for Jurgen Klopp's team and were, as predicted, difficult to beat. Sadio Mane celebrated his goal for a second time after the smiles were initially cut short when VAR was called in for a handball decision. It clearly hit Lallana's shoulder and so the goal was awarded.

However, the real controversy happened just before half time when Neto scored for the visitors. He received some stick online for an over zealous celebration but he had netted what he believed to be his first goal in the Premier League. That was until the tape measure was brought out again.

Offside I don't believe was ever meant to be studied and measured to the millimetre and if VAR is here to stay (I personally wish it wasn't but that's another story) then perhaps the offside rule needs updating.

Nevertheless, Wolves may feel hard done by, I've felt the same with similar decisions earlier this season, but rules are rules and that's what VAR is following so the goal was correctly ruled out.

As for all that talk about Virgil potentially hand balling, he didn't so just don't even start with that.

As the second half played out and Wolves brought on the 100% pure muscle Adama Traore some significant chances were created but Nuno's side just couldn't seem to convert.

All of this means Liverpool at the time of writing after collecting another three points, sit unbeaten at the top of the table, 14 points clear of Manchester City and 13 points clear of Leicester... I'm not saying it.


1) Tenacity, we do not know when we are beaten

It wasn't so long ago when I would watch Liverpool go down in a match or spend half an hour at 0-0 and look as though they had no route through. I've always believed in my side but it's only really in 2019 that this side that Klopp has built has made itself truly formidable.

Teams have thrown everything at us, from England, from Europe, from the World, but they can't stop us. The chips can be down and the tiredness setting in but this team will never give up, a late goal will come, there's sheer belief that we will be victorious.

It's so refreshing to see.

A year ago it was heartbreak, I spent the majority of summer 2018 hoping Ramos gained a career-ending injury and at the time, despite knowing how good we were, just couldn't see us getting to the Champions League final again.

But we bloody well did and we did it in style. That match against Barcelona (other than the 2005 final in Istanbul) is the most exciting and ridiculous Liverpool game I have ever watched in all my life. Absolutely phenomenal and again proving we just don't know when we are beaten.

The Champions League win was nothing short of what Liverpool deserved after finishing so agonisingly close to winning the Premier League title.

More silverware followed as Adrian the hero in goal helped us lift the UEFA Super Cup and then we travelled to Qatar in December and just casually became literally the best team in the world.

In years gone by Liverpool have never been short of stars, there's always been one or two diamonds within the team. Think of your Gerrard's, Torres', Suarez's. What hasn't happened for a very long time though is for Liverpool to have a team full of stars, players other clubs are desperate to have and that fellow professionals rate very highly.

In 2019, Liverpool had seven players on the finalist list for the Ballon d'Or and let's face it, the only reason Virgil van Dijk didn't win is because he's a defender and apparently if you don't score goals you don't deserve awards in football.

Klopp has found a way to bring in star quality, retain star quality and keep that star quality happy, even when they're sat on the bench. This may not seem like a skill or a lesson learnt but for me 2019 showed how important the ability to rotate and utilise the squad was and Klopp is a master at it.

The prime example for me was Divock Origi, at the start of last season, I genuinely had forgotten Divock was even on our books. By mid-2019 I was considering tattooing his name on my arm haha.

A squad player who often was found sitting on the bench yet on every single occasion he was called into action he gave his absolute all. He was pivotal in Liverpool's 2019.