Can Liverpool Come Away With More Than Just The 1 Point? 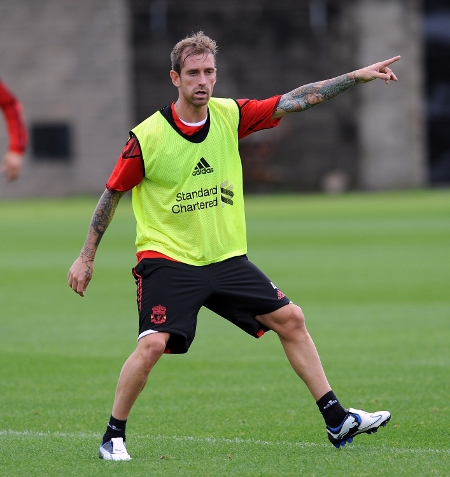 Raul trains with Reds before Birmingham clash...
So after what seemed like a hell of a long international break, Liverpool swing back into action on Sunday against Midlanders - Birmingham City. Liverpool were quite lucky in terms of injuries with all the players coming back from duties with their countries in good shape, Dirk Kuyt however was an exception after he injured his shoulder. He is expected to be out for quite a while so this could prove problematic for Roy.
Liverpool are also without Fabio Aurelio who is still recovering from an achilles problem and David Ngog also picked up a knock but may still be available for Roy to select on Sunday.
As pictured new signing Raul Meireles was also training with the rest of the boys so could most certainly feature in this difficult clash against the Blues.
Not forgetting too for the Reds that Joe Cole still has one match left on his ban for receiving his red card at the start of the season.
Birmingham also have a couple of injury worries and ex Arsenal man Alexander Hleb was supposed to be ruled out but after further reports suggesting that Alex McLeish may indeed utilise the winger within the 90minutes this weekend, we could see him play after all.
Parnaby and Phillips are two other players who are unavailable for the Birmingham boss but he has the pick of the rest of his fully fit squad.
Last season Liverpool's two games against the Blues proved tough and both ended in score draws. With the added controversy of the David Ngog penalty, Sunday's game will be far from a simple one for Roy's boys.
Birmingham will definitely be up for it and are more than capable of getting something like a 2-1 win over us and it worries me because i always feel looking at the Birmingham side that they will score. Although a draw would be acceptable you have to feel that Liverpool must go for the win. There will be harder away trips to come so capitalizing on the ones where the highest points tally is achievable is a sensible plan of action in my eyes.
Not sure how Roy is going to set up but you can almost guarantee it will be Torres leading the line. Would be very nice to get a glimpse at Meireles and i would also like to see Maxi Rodriguez start the game as we haven't really had to chance to get a good match out of him yet at this early stage of the season.
Image courtesy of www.liverpoolfc.tv
Birmingham City Dirk Kuyt Fernando Torres Maxi Rodriguez Raul Meireles Roy Hodgson
Follow @lfckirstylfc
FcTables.com
FcTables.com