Well this is a new training pitch routine...

So, the scouser we all love has finally decided to host his testimonial game on Saturday to celebrate 10 years at Liverpool FC. His tenth year at the club was in fact back in 2007 but the 32 year old wanted to wait until he could create an appropriate and one off special football match, something he had always dreamed of, not only this but he always had imprinted in his mind that all the proceeds would go towards his 23 foundation in order to help people and charities in Liverpool.

I must confess i had the biggest schoolgirl crush on Carragher, then the biggest teenage crush right up to a sort of now guilty pleasure, he is 32 after all, bit of an age gap going on there Jamie! Haha.

Point being, i have followed Carragher closely through his career, he started at the club just as my interest really began and as i grew older i really started to appreciate what a superb example of a footballer he is.

Yes, he can sometimes get hot headed and we all have hung our heads in shame when he's netted one of his famous "own goals" but it's all part of his character, part of the man.

Carragher may come across and sound like he's not the most intellectual man in the world but you ask any fellow footballer, manager or fan and they will all stick by the fact that Jamie knows his football. He is a brilliant reader of the game, obsessed with getting things right and learning from mistakes, any youngster coming up through the ranks would be proud to call him their teacher of the beautiful game. 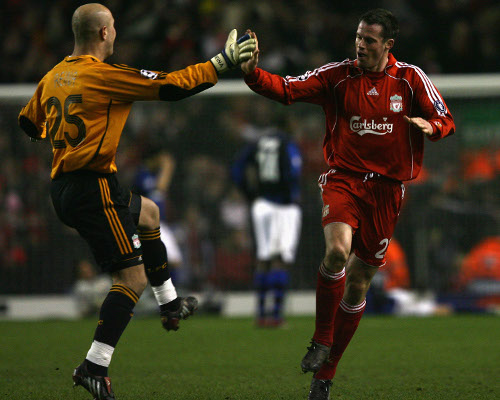 Outside of football he is also a shining example, he takes care of his two children - James and Mia. He is happily married to a fantastic lady (Nicola) who i respect more than any of the other "WAGS" if you wish to call them that. She leads her own life and doesn't try to cling on to the fame of her footballing other half, works hard and cherishes her children and husband. Just what a real lady should do.

Over the years we have all witnessed Carragher lift trophies, head in to crunching tackles, run round several football pitches shouting his head off at the rest of the lads (remember Arbeloa? haha) and showing shear passion every second he plays in front of the Liverpool faithful. 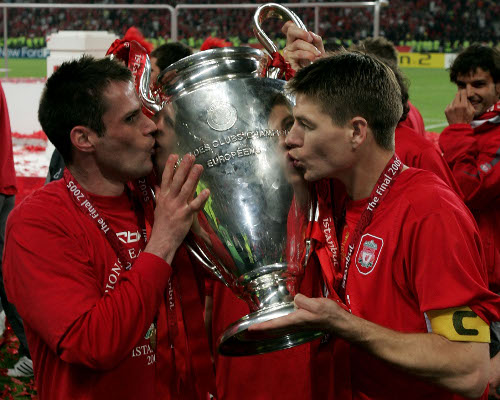 I for one feel it's high time we all raised our glasses to such a great man and such a fantastic hard grafting traditional footballer.

His spats with Gary Neville and over exaggerated celebrations in wins over Everton despite the fact he supported them as a youngster still to this day put a smile on my face and pushing aside the fact that in a couple of games time we'll probably all be utterly annoyed when he's slightly off the pace or nets ANOTHER own goal but we can brush that all under the carpet because his performances and passion for the club out weigh all of those niggling negatives.

Here's to another ten years... Whatever his next step is at Anfield i'm sure we will all be 100% behind him.

Jamie Carragher - They just don't make them like him these days...