Off To Old Trafford 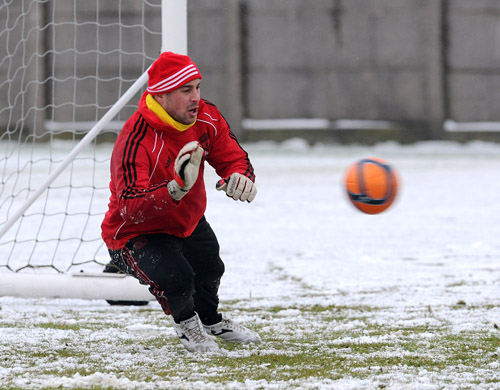 Reina trains on a snowy Melwood pitch...
(Image courtesy of www.liverpoolfc.tv)
So with the pressure most certainly at it's highest over Roy Hodgson's time at the club it's perhaps possible that we won't even have a manager for Sunday's FA Cup clash against bitter rivals Manchester United. Although it pains me to say it i reckon Sammy Lee might fancy giving it a pop in his one game in charge and doing Fergie's side over! Haha.
Assuming our new owners do what i am expecting though and wait until after the weekend to give their decision then we will in fact still be left with Hodgson. Yes we played pretty well at Old Trafford earlier in the season but after watching several more games i think it's quite evident that it was the players that rose to the occasion that day not necessarily Roy's quick thinking.
Nevertheless the occasion shall hopefully spur on the true Reds for Sunday's massive game. As much as i realise how important it is for us to focus on getting a decent finish in the league i can't help but strive for a win over the Mancs and even more so when we are now complete under dogs.
I can't see Roy resting players because he's lost enough friends as it is, there aren't many loyal fans left who would still be behind him if he dropped Gerrard and started Poulsen and dropped Torres.
Whether Fergie will be confident enough to rest a few of his players is a different question though. In all honesty he probably will and who can blame him? United are one of those soddin' annoying sides that can drop nearly half the side but still somehow get a result.
I'd like to think we were capable of getting a draw which of course would be more than acceptable with the chance to seal the deal at Anfield but realistically after our season it is too hard to predict what might happen.
Raul Meireles, Jamie Carragher and Jay Spearing are all still unavailable for Liverpool and Rio Ferdinand, Van Der Sar and Rooney are doubts for United although manager Alex Ferguson is quite confident they will start. (Damn!)
In dreamworld we'd see another 4-1 and a hilarious action shot of Vidic falling over but i don't think we're going to be so fortunate this time out. Here's hoping we at least put up a fight though and i'm still gonna play the "confident" act in the pub and go ballistic if we net one! Fingers crossed ay folks?
FA Cup Jamie Carragher Liverpool FC Manchester United Raul Meireles Spearing
Follow @lfckirstylfc
FcTables.com
FcTables.com