Can Liverpool Break Their Emirates Curse? 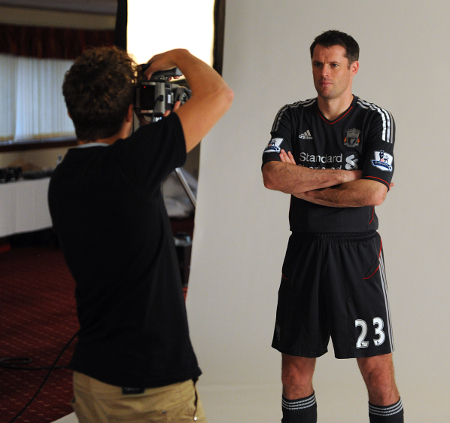 Carragher helps reveal the new Liverpool away kit...
Liverpool are off to London tomorrow to face slim hopers Arsenal who are still in with a chance of grasping the title, more so mathematically than realistically but nonetheless the Gunnars will be looking for all 3 points.

Liverpool have never won at The Emirates but we've collected plenty of draws in the past. After the brilliant performance against Manchester City on Monday night it would be brilliant to finally bust the trend and turn Arsenal over on their own turf.

The emotional Hillsborough service yesterday will surely have taken it's toll on the players and also manager Kenny Dalglish but hopefully the lads have had chance to clear their heads and I'm sure they are up for the challenge tomorrow.

Injuries for Liverpool mean we are still without captain Steven Gerrard who was seen on crutches at the memorial service yesterday. Also with him was Daniel Agger who is out for the rest of the season after a knee injury. Martin Kelly is also still unavailable and so too is Glen Johnson recovering from a hamstring problem.

For Arsenal they have a long list Bartley, Fabianski, Vermaelen and Mannone are all injured. There is a doubt hanging over Almunia who picked up a knee injury and so it will probably be Lehmann in goal. Sagna and Song are both doubtful too. Szczesny, Denilson and Djourou are also believed to be unavailable for manager Arsene Wenger.

After Andy Carroll got off the mark against City you have to fancy him to get a goal here. As he highlighted himself, he has already scored at The Emirates this season, so a repeat perforamce would be perfect. His link up with Suarez is also going well and the skills and surprise factor from our Uruguayan will be a first for most of the Arsenal players.

If Lehmann is in goal, yes he's experienced and he knows what he's doing but this is definitely a set back for Arsenal and a positive for Liverpool. Andy Carroll with the help of his human shield (or boyfriend? haha) Martin Skrtel in the box should be causing problems tomorrow.

I personally can see us nicking a 2-1, it's a long time coming and even with injury problems in defence, if we attack like we did Monday night we'll fluster Arsenal.
Andy Carroll Arsenal Hillsborough Kenny Dalglish Liverpool FC Luis Suarez
Follow @lfckirstylfc
FcTables.com
FcTables.com