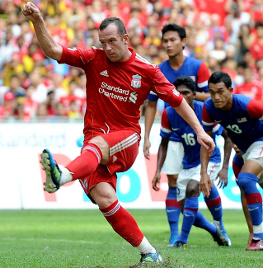 Charlie Adam gets off the mark for Liverpool...
It was another game filled with goals for Liverpool in the impressive stadium in Kuala Lumpar. Filled to the rafters with Liverpool fans, i think the Malaysia XI may have felt a bit small.

Kenny Dalglish was missing from the sidelines as he's home sorting out the the small matter of Stewart Downing. Also this week we've waved goodbye to Paul Konchesky. Good luck getting along with his Mom Leicester!

Liverpool got off the mark with a Charlie Adam penalty. His first goal in a Red shirt was delayed slightly after being forced to take his penalty again. He put both in the back of the net and sent Liverpool on their way. A soft penalty decision i thought but never mind ay?

Malaysia XI equalised shortly after with a super free kick from their captain, Brad Jones could do little to stop it.

Ngog went on to score twice in the second half. His first after a little bit of luck when the Malaysian defence had a lapse of concentration and a nice strike for his second.

Maxi Rodriguez jumped onto the scoreboard after sliding in to score Liverpool's 4th. Liverpool were looking strong but in similar fashion to the friendly against Guangdong, the opposition appeared to find their feet.

Two goals from Safee Sali put the scoreline on a tentative 4-3 to Liverpool. It did at one stage look like the Reds were going to throw away their lead. Thankfully Maxi had other ideas and with a nice header from a Dirk Kuyt cross got Liverpool a fifth goal.

Dirk Kuyt after creating the fifth made sure he got in on the action, pinging in Liverpool's 6th and final goal in what was an action packed second half.

For the Reds next it's off to Singapore for a training session and a chance for the fans over there to see their beloved players. Then it's back to England and the rather short trip in comparison to the KC Stadium.

As far as friendlies go it's looking pretty good for Liverpool. The youth in the set up have been impressive. New signing Charlie Adam appears to be settling in and even players who have been absent for months i.e. Aquilani and Insua look like they never left.
Charlie Adam David Ngog Dirk Kuyt Liverpool FC Malaysia XI Maxi Rodriguez Pre Season
Follow @lfckirstylfc
FcTables.com
FcTables.com