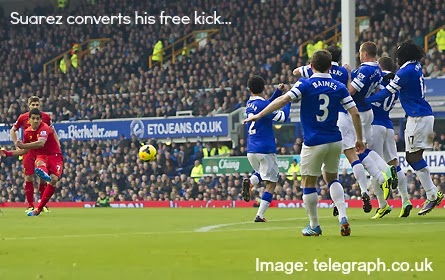 It was an electric Merseyside derby on Saturday as both the Blue and Red sides of Liverpool found the back of the net on three occasions. An end to end game with neither side intent on defending a lead, it was a shining example for football in the Premier League from two of its most famous clubs.

Liverpool were forced to make some changes to their line up after the fitness of Daniel Sturridge was called into question and Jose Enrique had to be left out. Jon Flanagan got a big chance to impress in the Liverpool defence whilst for Everton they had youngster Barkley plying his trade.

I've started several match previews here on The Liver Bird this season with something along the lines of "the game started in a lively fashion" and it was certainly no different for this fixture!

Liverpool took just four minutes to get onto the score sheet via the magical Philippe Coutinho. His goal may not have been pulled out of a hat but it didn't matter, he was in the right place at the right time and made sure he finished well when the cross fell to him in the box.

The away fans went mental in the blue cauldron across Stanley Park and Liverpool would have struggled to start the game any better. For Reds fans at the moment it is blatantly obvious that we have the attacking threat to take on any opposition, even without Daniel Sturridge starting, Liverpool still scored very early on. Our problem however lies in our defensive abilities and perhaps consistency. With the shake up to the back four not adding any real confidence, it wasn't long until Everton found themselves an equaliser!

I haven't been the only one this season noting Liverpool's faults when concerning set pieces and I think several critics were making their voices heard once again after today's result. Everton after a set piece situation very similar to Liverpool's managed to find the back of the net via Kevin Mirallas, in an almost carbon copy of the Coutinho goal, the Everton man was once again in the right place at the right time and was dealing with a very nonchalant defence.

With the game held at 1-1 after less than eight minutes it must have been quite a shock for both managers who can't have prepared for this but yet unwittingly had prepared their sides for one of the most attacking filled fixtures of the season and certainly one of the most prominent in derby history.

Shortly after ten minutes later Liverpool found themselves with a free kick just outside of the box. As seems to be the trend with Merseyside derbies there was a lot of handbags and players were definitely getting stuck in. Luis Suarez wanted to make sure he made the most of this opportunity though and he sure did!

A superb free kick that curved graciously around the wall and into the bottom right of goal put Liverpool back into the lead and perhaps noted the only moment of the game where Everton dulled slightly. For the following duration of the first half the Reds managed to deal with the Everton pressure and it began to look as though maybe a win was on the cards, of course it would have been naive of Liverpool to assume this was the way the match was going to go and it wasn't long at all until Everton were forcefully knocking on the door again.

An unfortunate moment of note late in the second half was a terrible challenge from Kevin Mirallas on Luis Suarez. I'm the first to admit that Suarez can be a very good actor but it was quite evident from this situation that he'd been on the receiving end of a bad foul. The replay further instilled original notions and Suarez was left with stud marks on the back of his knee. I feel as though Mirallas was pretty lucky to remain on the pitch, his foot was extremely high, it was reckless and there was no way in hell he was going to get the ball. Whether hm getting sent off would have had a strong bearing on the game, I don't know but you do have to feel if it wasn't a "boy cried wolf" situation maybe the Everton player would have had to leave the field.

Early in the second half Everton suffered a blow when Leighton Baines was forced to leave play, he was replaced with Gerard Deulofeu. Shortly after their substitution Liverpool were presented with a very good chance to further punish the home side when Luis Suarez weaved his way through the Everton defence, a perfect pass to Joe Allen left him with an easy shot at goal but the midfielder instead put his effort wide. It really was shocking and I hate to get on the back of players but there really was no excuse for that one and Liverpool could have done with being 3-1 up instead of 2-1 up as we were quick to find out.

Just after 70 minutes Romelu Lukaku made his presence felt when he converted his effort after an assist from James McCarthy. Simon Mignolet did his best to deal with it but couldn't quite resolve the problem against his fellow countryman. Mignolet however could not be criticised really after keeping Liverpool out of danger on too many occasions throughout the match.

With Victor Moses now on the pitch and Daniel Sturridge entering play just before the 80 minute mark it was yet again evident that neither manager was content in playing for a draw. I was watching the match at work (inside corporate areas at Molinuex) and a lot of the neutrals watching the game couldn't seem to understand why we wouldn't just sit back for a draw. I on the other hand found myself thinking "Are you mental? This is the Merseyside Derby, of course we're playing to win! Not to mention the fact we're currently chasing Arsenal" to me the concept of playing for a draw here was alien and it was nice to see both managers really going for it even if the end result didn't favour either side.

At 81 minutes Romelu Lukaku put his side into the lead. This was the point in the game that really highlighted Liverpool's poor defence of late. There was a lot of complaining pre match about Jon Flanagan starting but I personally feel he did well over the 90 minutes on Saturday. The rest of the back four however had questions to answer, with the experience that they have they simply should have done better. Left by Glen Johnson, Romelu Lukaku was able to rise easily in the centre of the box and power home his header. With just 9 minutes on the clock left the Reds were facing the real prospect of watching all of their hard work amount to nothing.

Thankfully Daniel Sturridge and Steven Gerrard had other plans.

With two minutes left of full time a lovely whipped in cross from Steven Gerrard was destined to reach the head of Sturridge who flicked his effort home and past a stunned Tim Howard. Liverpool had equalised and would not walk away empty handed, unfortunately you couldn't help but feel that we should have taken more.

It was a simply brilliant game, enthralling to watch but with the mistakes made and opportunities missed it is gutting to have drawn the match, of course you can't complain too much. Liverpool showed great fight and attacking presence it's just there's a real need to work on defensive play before it becomes too late.

The Reds still find themselves in second after today's results with United and Spurs only capable of amassing a maximum of 23 points this weekend there is still breathing space for Brendan Rodgers as Liverpool look to continue their fantastic start.

I asked you as always for your thoughts on the game on Twitter and I think you'll find there was a general consensus on the game. Thanks again to all of you who replied!

P.s. I was going to do a full post on my attendance at the football blogging awards but I have coursework deadlines this week plus I'm working two jobs and doing a week of work experience so I just can't see how I will fit it in.

I'd just like to say thank you to the Football Blogging Awards and Campo Retro for a brilliant night! The National Football Museum was a fantastic venue and despite not winning an award I had a top night as a finalist!

It was also a great pleasure to finally meet the likes of Gareth Roberts and Jim Boardman from The Anfield Wrap and also Paul and Chris from The Redmen TV! And not forgetting the brilliant LFCFansCorner who I never realised was so young (I'm so sorry I never caught your name)! A massive congratulations to both The Redmen TV and LFCFansCorner too who both won awards on the night, extremely well deserved!