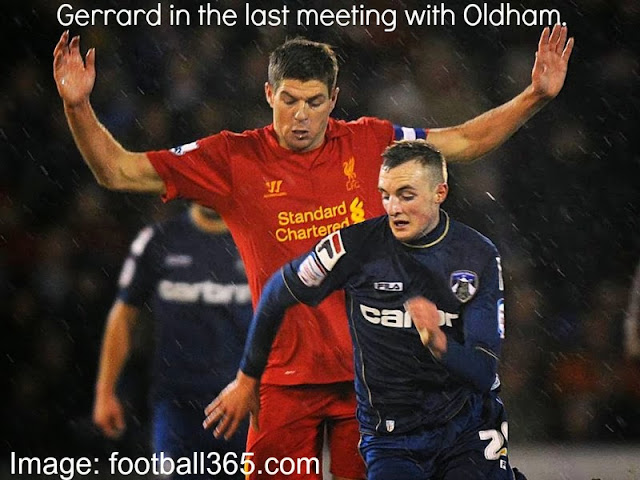 This is the third time Liverpool have been pitted against Oldham in the FA Cup in as many seasons. The Reds will surely look to proceed further in this competition despite having most of their commitment pinned firmly on the league.

It is predicted that Brendan Rodgers will field a very different team for the tie at Anfield on Sunday but with Steven Gerrard recently back fit, he could feature in the starting line up boosting Liverpool's experience.

Injuries for Liverpool mean they are without Daniel Sturridge, Joe Allen and Mamadou Sakho whilst Oldham manager Lee Johnson has a relatively strong squad to choose from. Philliskirk, Dayton and MacDonald are all available after recent knocks.

Recent form for Oldham sees them having won only one of their last six matches and that was an FA Cup tie against Mansfield. League form for Oldham is currently problematic and they are placed 19th in League One on 24 points.

The last time the two sides met was in January last year and it was a positive result for Oldham who got the better of Liverpool. The game ended 3-2 with Liverpool scoring via Suarez and Allen.

The teams haven't met very often in history and we have to go back to 1914 to find a win for Oldham at Anfield.

I would usually provide you with a stat sandwich here but they're always harder to come by in cup matches unless you wanted the standard; how many times Liverpool have won it etc. I did this week though get a chance to ask you your predictions for the game and below are a few of the tweets I received.

I must admit it's difficult to predict a scoreline when you have no idea what the starting XI will be but I still feel Liverpool are in a position to take control of the game and also grab a few goals. I'm currently swayed to the popular opinion of 3-1 as I do feel Oldham will find a goal and if I was popping a quid on the game, that would be the scoreline I'd go for.

Apologies for the preview being thin on the ground, it's always a bit more difficult to find the information you need when it's a cup game for some reason. Normal service resumed for the match report on Monday!