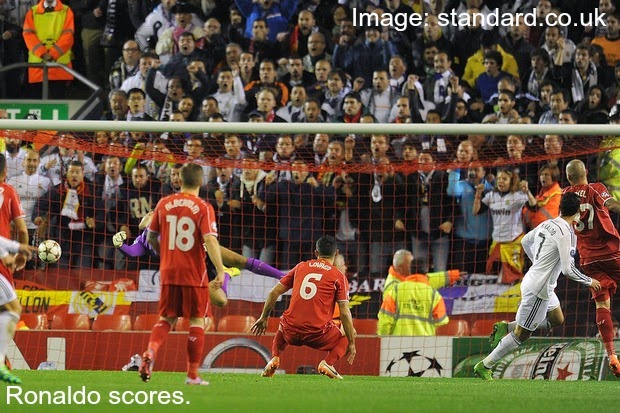 "Sheer madness" that is the descriptive phrase Mark Lawrenson has selected after watching Liverpool lose 3-0 to Real Madrid. Surely a reaction like that can only be warranted by the poor defensive performance? No? ... No. Apparently it is "sheer madness" that Mario Balotelli would swap his shirt with an opposition player at half time, forgive me for thinking Lawro has pushed the 'overkill' button here.

I never set out for this report to be so heavily focused on Mario but after watching the media reaction bubble from a molehill to a mountain, I simply had to voice my opinion.

Several Liverpool fans never wanted Balotelli in the first place, that's fine. These people are not the ones I hold a frustration with, nor am I necessarily frustrated with the rest of our fanbase who are rightly raising questions about Balotelli's performances. My issue lies with those who are making him a scapegoat and the media who love nothing more than to write sensationalist crap about the Italian.

A regular criticism of Balotelli is that he is a lazy player and he is. I knew this, you knew this and most importantly, Brendan Rodgers knew this before we signed him. Secondly, you will never get the best out of Balotelli by playing him alone and in a side that has a very dire supply line.

Whilst these issues do not offer him an excuse for a poor start to the season I do feel that some people are being overly harsh. For me, to take a striker off when you're 3-0 down against Real Madrid makes no sense. Rodgers pleaded that the decision was made because he wanted to add some more "movement" to the team (a jibe at Balotelli's laziness I suppose) and in fairness, there was more movement but were there goals? No. The increase in movement was also partly down to the fact that Real took their foot off the gas in my opinion but what do I know ay?

The spotlight placed on Mario and the shirt swapping incident in this game has frankly been ridiculous, do you think Madrid fans are going spare at Pepe? It has offered the perfect cover story for Liverpool who are struggling to find excuses for the real issue in the side - the shocking back four.

It's ironic too in my opinion for a club like ours to offer to teach Balotelli the "culture in English football" when we sat back and brushed under the carpet the fact our last forward had bitten a man for the third time... If Balotelli had scored five goals already in a Liverpool shirt, nobody would have said anything about that shirt swap. He just hasn't earnt the right to behave in the way he does yet and for some fans it's just too much.

Anyway, on to the game.

Liverpool actually started the game very brightly. For the first ten minutes or so with the roaring Anfield soundtrack in the background it felt like the Reds were well on their way to another special European night. Things would quickly change though for the home side.

Cristiano Ronaldo found his first ever goal at Anfield just after the 20 minute mark. There were no real qualms about this goal it was just classic Ronaldo and Liverpool had to deal with that.

After starting with a decent spell it seemed possible that Liverpool would be able to create another good portion of play despite having conceded. Sterling was causing several issues for the Madrid back line whilst Joe Allen worked hard in an attempt to protect his back four. And they bloody needed protecting.

Just before the half hour mark Real had undone our defence with a looping header from Karim Benzema. Our current back four, no matter what players are chosen just cannot seem to work as a unit. I mentioned in a recent match report the lack of communication between Skrtel and Lovren add to this a still brand new Alberto Moreno and Glen Johnson and you are just asking for trouble. There always seems to be one member of the four who's lapsed away or been drawn elsewhere leaving Liverpool unprepared at the back and it's just not good enough. Skrtel and Lovren for me are decent defenders but they need to learn to work in a unit!

If you thought this was bad, the third goal was just shocking and Simon Mignolet had an absolute mare. Another topic I've covered a lot on this blog is Simon Mignolet. As a big fan of Reina I never really understood why we got rid of him but when I heard we were signing Mignolet I totally understood, young, upcoming lad who can grow with the team. However as the games have gone by it's becoming very clear that I personally hold no trust in our goalkeeper, he is extremely inconsistent. Which is soddin' annoying because some of the saves he makes are world class, then he goes and does what he did last night.

The corner was whipped into the box from Pepe and Simon Mignolet had made the decision to leave his line. In the instant that he makes this decision he simply must deal with the danger but his reaction was extremely poor. Failing to clear the ball Karim Benzema took the opportunity to score his second goal of the night and Real Madrid's third.

I was pissed off at this point. Yes it's Real Madrid, yes they're a bloody good side but this was pretty shite from Liverpool. The best moment of the whole game for Liverpool came right at the end of the first half when Philippe Coutinho strook a stinging shot that smashed off the post.

As we all know by now, Mario Balotelli was taken off immediately for the second half with Adam Lallana coming on as his replacement. I don't have much to say about the second half if I'm perfectly honest I was just annoyed. Lallana admittedly did make a difference and he showed more effort than some players on the pitch.

Later joined by Can and Markovic, I then got even more annoyed because to be brutally honest it's a bit disheartening when these signings are your "game changers". Again, in fairness, they added movement, we did liven up a bit but in terms of chances at goal it was pretty much the same as the first half. Having removed Henderson the balance was affected in midfield and passing also decreased. It just didn't work for me and I knew we wouldn't find the back of the net with that second half team. Another thing that annoyed me (can you tell I was miffed last night?! haha) was that three substitutions were made when we were 3-0 down without even apparently considering Rickie Lambert, where was the harm in chucking him on for the last 15? It just didn't make sense at all to me from Brendan last night I'm afraid and I hope for a better set up and better decisions for the next leg.

@_TheLiverBird the defence is the major problem. Both centre half's are not commanding and bereft of any confidence.Mignolet not good enough
— Nick Kerwick (@nicklfc82) October 23, 2014


@LFCKirstyLFC unfortunately came up against a team just full of confidence and goals something Liverpool lack at the moment
— charlie woodhouse (@TheWoody9) October 23, 2014

Next up for Liverpool is Hull at home.