Reds Through To Semi Final 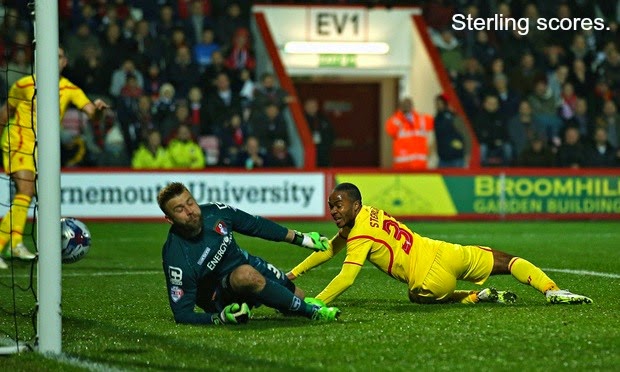 Liverpool finally got themselves back to winning ways on Wednesday evening as they put three past Championship toppers Bournemouth. A much improved performance from the Reds' attack allowed Liverpool to punish the Cherries early on after they missed some chances of their own. A second half consolation goal wasn't enough for the home side to spring a comeback and Brendan Rodgers' side are now through to face Chelsea over two legs in the semi finals.

A decent first fifteen minutes for Liverpool was almost scuppered by Bournemouth when a couple of real chances nearly enabled them to take the lead. The Reds though remained in control and at 19 minutes Liverpool had got themselves off the mark.

A lovely headed pass back across goal from Jordan Henderson fell perfectly to Raheem Sterling who made sure he finished well. Sterling is easily our star player but he hasn't been converting his chances of late and so it was brilliant to see him score, it's just what he needed especially with Arsenal coming up at the weekend!

Once again Rodgers opted to play without a real striker which to be honest I hate however against Bournemouth it was a lot more beneficial for us and almost made me accept the fact that he'd only started Lambert and Borini on the bench... almost.

A few minutes later and Liverpool were at it again. This time it was Lazar Markovic who managed to get himself into a bit of space in the centre of the box when the ball splayed out to him. A cracking strike sent Liverpool 2-0 up before we'd even reached the 30 minute mark.

It was a really bizarre feeling to be playing pretty well and scoring multiple goals at this stage. Of course, there was another whole half to go but I honestly thought this was going to be a tough battle for the Reds.

For the second half Brendan Rodgers made a substitution replacing Dejan Lovren with Mamadou Sakho.

Just five minutes into the second half and Raheem Sterling had found the back of the net again. A lovely right footed shot sent to the left of goal looked like it had sealed Liverpool's progression into the semi finals.

Bournemouth though were not down an out. Despite being 3-0 down they had created issues for Liverpool who still have several problems with their out of form defence.

At 56 minutes Dan Gosling converted for the Cherries. He'd been creating issues for the Reds for a while and deserved his goal. Shortly afterwards another effort from Gosling smashed off the post leaving Liverpool dumbstruck, with 20 minutes of the game still left it started to become a bit nervy for Brendan Rodgers' boys.

Thankfully though the Reds were able to safely see themselves through to the semi finals, only to watch Jamie Redknapp pull out Chelsea as our opponents! Oh well, at least it's over two legs.

I asked you for your thoughts on the game but for some reason the embed codes off tweetdeck are playing up and I can't add them into my HTML. Apologies for that! Please tweet in your score predictions for the Arsenal game though and hopefully we'll be back on track.
Bournemouth Lazar Markovic League Cup Liverpool FC match preview Raheem Sterling
Follow @lfckirstylfc
FcTables.com
FcTables.com