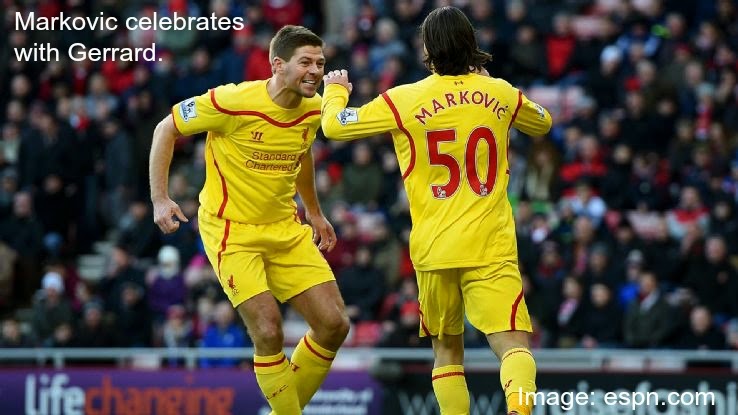 Liverpool successfully ground out a 1-0 win over ten man Sunderland on Saturday after a Lazar Markovic goal in the first half sealed the deal for the Reds. It wasn't a perfect performance from Brendan's side by any stretch of the imagination but there were certainly positives to take from the game including the clean sheet and influential performance from Markovic.

The Reds began the game in a very bright fashion with an early through ball from Philippe Coutinho reaching Markovic, the Serbian was then taken down by Wes Brown but the referee deemed the incident not to be worthy of a penalty.

Luckily for Liverpool their next brush in with a refereeing decision worked very much in their favour. With just eight minutes gone in the game another quick break from Markovic down the right wing allowed him to pass the ball to Steven Gerrard. The captain then opted to pass to Borini who was quite clearly fouled as he attempted to get the ball back to Markovic, thankfully though the referee made a great decision opting to play advantage. Markovic then continued his run and slotted the ball through the keeper's legs to put Liverpool 1-0 up.

It was a well deserved goal for Markovic who despite not always being effective enters every game with exactly the right attitude. He's willing to give his all and really push forward in attack, Sunderland were clearly flustered and not even a quarter of the game had been played.

Another great chance for Liverpool arose shortly after the goal when Alberto Moreno won the Reds a free kick on the left hand side of the box. Steven Gerrard stepped up and with a brilliant effort forced Pantilimon into a save.

As Liverpool continued to press in the first half whilst Sunderland struggled, it was Lazar Markovic again wowing the crowds. As the ball splayed out to Lazar who was hovering outside the box, he opted to go aerial in his effort, jumping before smashing an excellent shot at goal only to see it crash out off the post, onto Pantilimon and away from danger. It would of been an absolutely fantastic goal but luck wasn't on Lazar's side in that instance.

Towards the end of the first half Fabio Borini was almost rewarded for his efforts in attack. A superb ball from Emre Can allowed the Italian to break into the box, his first touch took the ball nicely around the keeper but he was unable to find the end product from the tight angle. For me Fabio Borini had a great game. As many are aware I much prefer playing with a striker and whilst Borini is by no means the best he offers a lot to our game. His ability to draw the defenders' focus on to him creates space therefore allowing players such as Markovic to break into the box and really create problems.

In the second half things went from bad to worse for Sunderland who were still really struggling to create any real chances leaving Mignolet with no real job on. Bridcutt who had been booked in the first half found himself receiving a second yellow after taking down Emre Can on the wing. In my opinion it was pretty harsh to give Bridcutt the second booking here and I do think Sunderland were unlucky to see him sent off however the home side appeared to play a lot better once they were down to ten men.

Sunderland's best chance of the game fell to Adam Johnson who from distance in the second half struck a fluid shot. It's movement had completely beat Simon Mignolet but the crossbar came to his rescue and ensured Liverpool would hang on to all three points.

@LFCKirstyLFC Excellent first half then BRs poor tactics were exposed with the subsequent changes he made. 3 onfield changes for Gerrard!!!
— Mia Culpa (@UBSixT) January 11, 2015

For me of course all that really matters is the three points but it's quite worrying to realise that the only reason you beat Sunderland was due to a decent decision from a referee. We still really struggle to be clinical and I'm not certain that will be fixed any time soon even with the return of Daniel Sturridge.

However the Reds are on a positive run and I do try to remain positive going forward. Next up for Liverpool is Aston Villa away.
Lazar Markovic Liverpool FC Match report Premier League Sunderland
Follow @lfckirstylfc
FcTables.com
FcTables.com