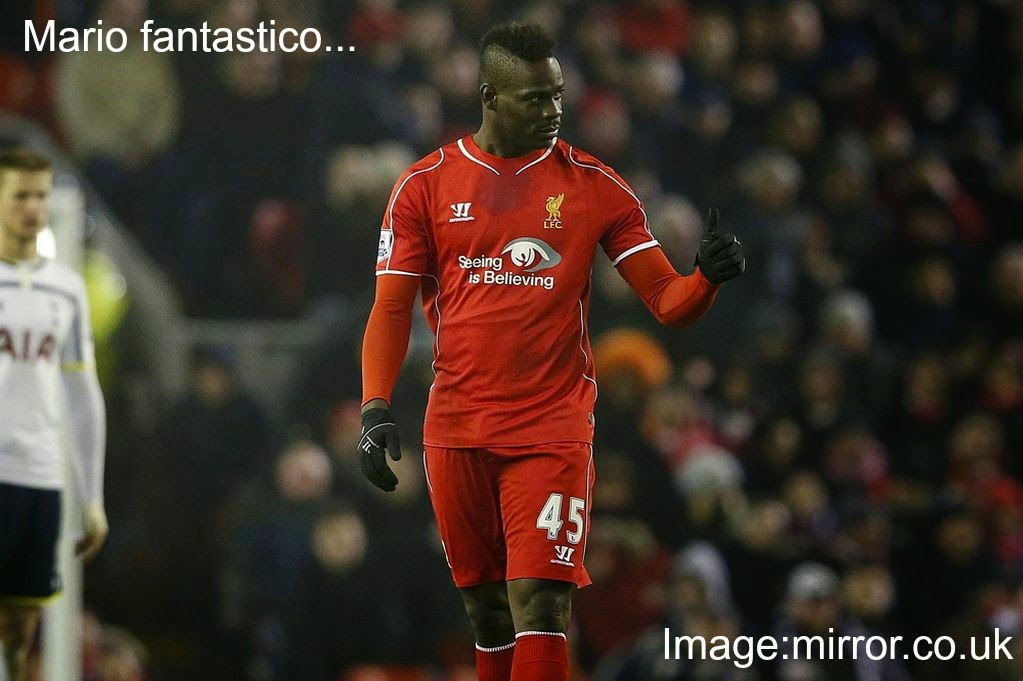 Mario Balotelli scored the winning goal on Tuesday evening as the Italian secured all three points for the Reds in the 84th minute. In an end to end game Brendan Rodgers' side took the lead twice only to watch Spurs level the scoreline before eventually sealing the win.

The game started with electrifying pace as both sides created dangerous attacks. With possession being foolishly lost in midfield it became easy for both sides to break and it wasn't long before Liverpool took advantage and scored their first goal of the game.

After Simon Mignolet made a save at the other end of the pitch his resulting kick found its way to Daniel Sturridge, with Markovic to his left he laid the ball to him and continued his run. As Lazar squared up to take his shot I found myself wondering why he wasn't passing it however his somewhat tame shot found its way past Hugo Lloris who perhaps should have done better.

As mentioned in my preview I wasn't feeling very positive at all about this game but after starting in such a lively fashion it definitely felt as though Liverpool had goals in them. Unfortunately though, Spurs did too and it was a banker that Harry Kane would eventually score.

At 25 minutes he got his chance, perhaps aided by a momentary concentration lapse by the Liverpool defence, Kane created enough space to get a shot off and scored high into the middle of goal.

By half time the scoreline remained the same however chances were being created left, right and centre with both goalkeepers being called into action. Simon Mignolet had another absolutely cracking game in goal (brushing aside the dodgy decision to come out early on against Kane).

Daniel Sturridge who is still finding fitness was also unlucky on occasion, a cheeky back heeled effort late in the first half was particularly close, it would have been a fantastic goal had it gone in!

The second half started as a carbon copy to the first with both sides once again playing in a pacey fashion. This time it took Liverpool just seven minutes to find the back of the net.

A penalty awarded for a foul on Daniel Sturridge was converted by captain Steven Gerrard who was clearly elated to have scored what could have been a winner for the Reds.

As the game continued though Spurs themselves had another opportunity when they were awarded a free kick in a dangerous area. For me, it wasn't even a foul so I was already annoyed when the free kick was awarded but things got worse.

The free kick was whipped in with Harry Kane clearly standing offside, he was free however apparently to set up goalscorer Dembele without being spotted by the linesman. That goal just shouldn't of been allowed but it was and the Reds had just under 30 minutes to once again regain the lead.

As the minutes ticked by I began to hope that Brendan would actually consider chucking Balotelli into the mix. As we all know by now I am quite possibly his biggest fan, I have supported him relentlessly and just desperately want to see him do well. So when I saw he had been "awarded" a seat on the bench in light of the injury to Raheem Sterling, I had hope he'd get a chance to feature if the scoreline was right.

And the scoreline was right, like him or loathe him Balotelli has been known as a big game player and here was his stage. At 73 minutes he was introduced. At 45 minutes I'd already tweeted this beauty... haha

And, sure enough at 84 minutes Balotelli got his chance to silence his critics, well, at least for a few days. The Italian was in the right place at the right time (oh wait, that Balo lad doesn't move does he?!) and after a lovely cross from Adam Lallana he finished with ease to give Liverpool a massive win.

Needless to say I was absolutely over the moon, I'd jumped up in the pub and chucked my cider all over my brother and me fella haha it was bloody brilliant, I'm still smiling like a Cheshire cat now just thinking of it. I just hope now that he uses this as a positive and that we see more of the same. I totally understand he's not the easiest player to like but credit given when due, that was some quality game saving from Balo last night.

And that was that. Mario Balotelli of all people had just sealed Liverpool all three points. Superb stuff.


@LFCKirstyLFC Can as a defender in 1st half and as a midfielder in the 2nd showed how brilliant he can be in a no. of roles. By far our MOTM
— Ali Saif Bilgrami (@alisaifbil) February 11, 2015


Next up for Liverpool is Crystal Palace in the FA Cup!