on November 20, 2015
Firstly can I just say a huge thank you to everyone who voted for The Liver Bird and got me onto the shortlist for "Best Established Blog" at this year's Football Blogging Awards. Unfortunately there was no win this year but congratulations to deserved winners; The Football Pink and Goalden Times.

Despite walking away without a trophy this year I still feel like one of life's winners after meeting an absolute legend; John Barnes. He was invited to the event by Ladbrokes and I went over to get a photo with him earlier in the night, he praised my phone case which has a Liverpool emblem on it too haha. Things got even better though when we found ourselves queueing behind Digger himself for a pie at the buffet. 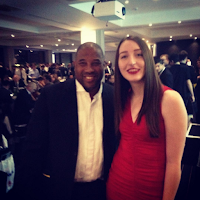 I saw my chance and I took it, "So John, what do you think of Jurgen Klopp?" I asked. In a nutshell, he really likes our new manager but he stressed that he's not going to turn things around quickly with the team he has, he needs time. He made a valid point when he asked me to name a player that Arsenal or City, United, Chelsea etc would take off of us and at the same time we both said Coutinho and nobody else. It's safe to say Barnes is a Klopp fan and like myself believes as Liverpool fans our expectations are sometimes a bit too high.

Shortly afterwards, Stan Collymore mingled into the queue as he was waiting to be interviewed by Ball Street, he and John got talking so me and my fella moved past them in the queue. Five minutes later there's a tug on my arm, who is it? John Barnes running the banter about us jumping the queue so he pushed back in front haha! To top it all off he then ended up doing Rapper's Delight by the Sugar Hill Gang before presenting an award. It was just quality. He's genuinely a really lovely guy with a top sense of humour.

Now, on to the important stuff... Manchester City away!

The big news this week for the Reds is the fitness of Daniel Sturridge, it appears as though the forward may be available for the game but Klopp will have to make a late decision. I reckon he'll start from the bench but I do worry about rushing Daniel back sometimes!

Mamadou Sakho is one key player missing from the line up and it is Dejan Lovren who will take his place. Lovren has a real chance here to prove to Klopp and the fans that he is capable of a consistent performance, I'll be watching him closely.

For City, they are without Nasri who suffered a hamstring injury recently and also unavailable is Bony. There are several key players such as Aguero, Silva and Kompany who will be subject to late fitness tests in order for Pellegrini to finalise his starting XI.

The last time the two sides met was in March this year, the Reds got the better of City thanks to a lovely goal from Philippe Coutinho in the 75th minute, the game ended 2-1 at Anfield. Our last trip to the Etihad however didn't end very well, Liverpool were beaten 3-1 thanks to a brace from Jovetic and an Aguero goal. To make things worse, the Reds were only on the score sheet thanks to an own goal from Zabaleta.

Recent fixtures with Manchester City have always been an exciting affair but you have to go back to October 2008 to find a win for the Reds in the league at the home of the Sky Blues.


I think tomorrow's game is going to end in a score draw, I'm not sure we're capable of picking up the win however this could depend on which team Pellegrini selects, injuries may play a big factor. I didn't get chance to ask you for your score predictions this week but please tweet me your thoughts on the game after the match tomorrow!

I'm definitely going to be putting some money on Coutinho to score, might have Coutinho first in a 2-2 result. Keep an eye on my Twitter and I'll let you know what I bet on.

I can't wait for kick off, this international break seems to have taken an absolute age, here's hoping Klopp can work some of his magic and pick up a good result for the Reds.