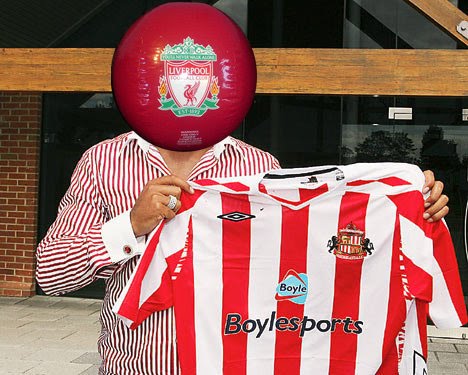 Let's hope if they do score this time out it's an actual player on the scoresheet...
Liverpool open the doors for Sunderland tomorrow as Steve Bruce's side make the trip to the North West to face Roy Hodgson's deflated side. After being knocked out of the League Cup by Northampton it is not a great feel around Anfield at the moment but Hodgson has dropped clues in an interview that none of the XI who started on Thursday night will feature on the team sheet for tomorrow's game.
No Liverpool fan will forget a certain Sunderland game last season when a giant inflatable Liverpool beach ball helped along Darren Bent and completely fooled Reina to seal them a 1-0 win. Liverpool of course had the last laugh though in the follow up fixture when they beat Sunderland 3-0, the game included that superb goal from Fernando Torres from a tight angle near the far corner of the box.
It is believed there is a possibility that Dirk Kuyt may feature for the Reds tomorrow after apparently recovering a lot quicker than expected. Fabio Aurelio however is still unavailable.
Sunderland boss Steve Bruce is clearly concerned about Liverpool's renewed attitude coming into this game after a humiliating defeat, he was quoted saying: "It won't be easy because they'll be hurting and disappointed over what happened in midweek." he went on to say "We must be weary."
Looking at the Sunderland side it's hard to back up a statement that they have any "real" threats, of course Bent will always pop up with a goal but take care of him and there shouldn't be many more problems for a strong Liverpool side.
Joe Cole i think will probably start tomorrow and his skill & pace will be useful in this game. I have to assume that because Roy is supposedly not starting Lucas that it will be Poulsen in midfield tomorrow either alongside Meireles or Gerrard depending on where the boss decides to play the captain.
Going with a 2-0 score prediction as i feel we can keep a clean sheet against these lot and after looking at Fernando Torres against Manchester United it looks like he's at the stage now where the goals are going to start coming more frequently.
A convincing win would do us the world of good.
Darren Bent Fernando Torres Liverpool FC Steve Bruce Sunderland The Beach Ball Goal
Follow @lfckirstylfc
FcTables.com
FcTables.com