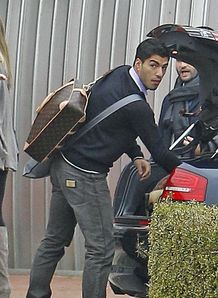 Suarez arrives...
Earlier in the season Liverpool fell to a 2-0 defeat at the Britannia but as we all know, several things have changed since then. With Kenny Dalglish settling in nicely to his new job and clearly boosting the sides performances in the past few weeks, hopefully this time out Liverpool can get the better of Stoke.

On the back of a win in the FA Cup against Wolverhampton Wanderers, Stoke may have some confidence coming into this fixture but with two losses and a win in their last three games in the league perhaps this backs up a case for Liverpool's confidence.

The Reds recent form reads two wins and a draw with the attack looking a lot more lively too. Raul Meireles has been on fire of late and should he start tomorrow expect another electric stint from the midfielder.

Steven Gerrard I'm sure too tomorrow will be filled with excitement and will no doubt be looking to support Luis Suarez in his bid to find his first Liverpool goal.

The Reds are still unable to call on Jamie Carragher but he is expected to be back in time for the huge game against Chelsea. Also unavailable is Andy Carroll who is close to being fit but still not quite there. Doubts too for Liverpool mean Lucas and Spearing may not be available.

Stoke are without Higginbotham who has a hamstring injury and also out due to suspension is defender Ryan Shawcross.

Liverpool didn't even get on the score sheet last time out so that is perhaps the first point to assess. Of course another three points would do wonders for our league run at the moment and could see us increase our hold in 7th place.

Don't know about you lot but I'm off to check the odds on Luis Suarez first goalscorer!