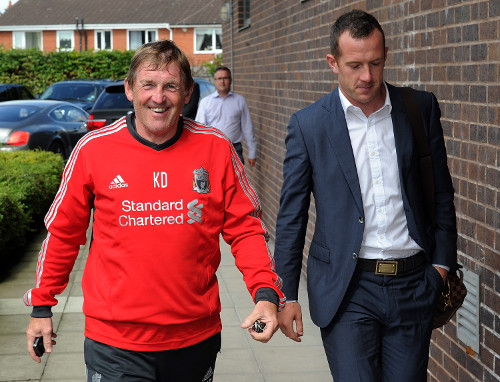 CA: "I put this suit on just for you... and check the belt buckle." KD: "Hahaha, you should nae have bothered lad."
It's been a long time coming but the rumours surrounding Blackpool player Charlie Adam and Liverpool FC have finally been cleared up. Last night it was Stewart Downing dominating the tweets but after Aston Villa apparently rejected the £15million offer from Liverpool attentions turned elsewhere.

The 25 year old was linked strongly with Liverpool in the January transfer window but the deal never came to fruition. Believed to be in the region of £8 - 9million  the second deal of the window for Liverpool appears to suggest that Dalglish and co are trying to revamp the midfield. With exits in that area of the pitch also highly anticipated it is good to see some action in the window.

Dalglish will surely be raring to go with the Scottish midfielder and with the Asia Tour getting closer and closer it would be nice to see Adam alongside Henderson for Liverpool so we can get an idea of what they have to offer.

I have to be honest, unlike some people who think he's exactly what we need i have some minor doubts. I just think he's over rated and it could be a case of a small fish in a big pond. Don't get me wrong he's put in some cracking performances in a Blackpool shirt and by miles was their best player but I'm not fully convinced he'll do the same in a red shirt. I am however fully behind him and hope he proves me wrong!