It was a bright March morning two years ago when Liverpool fans were rising and preparing for the massive game against Manchester United. The trip to Old Trafford, the pub or even to the armchair is sometimes a nervy experience before games like this but the excitement and adrenaline always prevail.

My morning back in March 2009 consisted of me getting ready for work and having to pull myself away from the television and the ramblings of the sexist dinosaur, ahem I mean Richard Keys.

A season in which Rafael Benitez had helped fuel a title challenge meant the Manchester United result mattered more than it had done for a long while.

After the regular build up and mind games from the Manchester United camp, Liverpool quietly kept themselves to themselves as they perfected Benitez's crafted instructions on the training pitch.

When match day came, nobody could have predicted the outcome.

Manchester United got themselves on the score sheet first with a Ronaldo penalty. It shouldn't have, but just the sight of United scoring a penalty at Old Trafford and so early against us made most peoples hopes drop almost immediately. We all knew the lads would fight on but when United take the lead at home, the levels of work and concentration required are immense.

It was a shock then when just ten minutes later, Fernando Torres left Vidic flat on his face and slipped one past Van Der Sar to put Liverpool level.

At the time, Vidic was talked about as one of the best defenders in the league, some still argue his case now, but that day in March 2009, he was made to look a complete fool.

The Reds were now oozing with confidence and a typical Gerrard run into the box saw him upended by Evra. As the captain stepped up to take the penalty, everything fell silent.

The number 8 converted and celebrated by running to the nearest cameraman and kissing the screen.

The away end had gone berserk! I was in an executive box, a man and his grandchildren had kindly allowed me to stay in the room and watch the penalty, can't deny i had a spring in my step handing out the rest of my betting slips that afternoon.

This was fantastic, the perfect time to take the lead just before half time and it felt like we had the upper hand over Fergie's boys.

The second half took a lot of time to unfold and the pace of the first half was missing but it was Liverpool again who would liven things up this time with the skills of Fabio Aurelio.

Steven Gerrard was literally ragged down by a useless Vidic, he was absolutely terrible that game, how people try to make excuses for him I'll never know but the defender was sent off for his rash challenge.

Fabio Aurelio, the sneaky little Brazilian was chosen to take the free kick outside of the box on the right hand side. A lovely curled effort saw him send the ball home from 25 yards, the Reds were now 3-1 up at Old Trafford and still with fifteen minutes left on the clock. 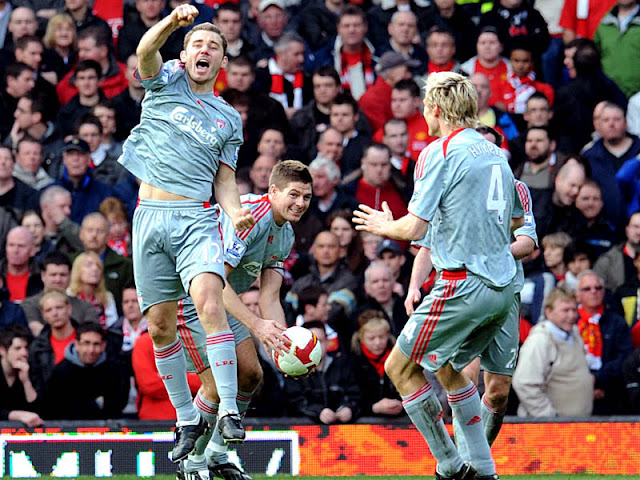 Stoppage time for Manchester United is usually something that is welcomed but the tables were turned in March 2009. A goal kick from Pepe Reina managed to reach to Dossena who had made a successful run, without hesitation, Dossena saw his chance and with a cheeky lob made it 4-1 to Liverpool.

I couldn't believe my eyes, we'd absolutely embarrassed them, they'd scored a penalty and barely threatened us all game. The lads and Rafael Benitez had figured out how to crack the Rubik's Cube, not whilst comfortably at home on the sofa, but hanging upside down from the shed door frame.

I can't remember the last time a team played so well at Old Trafford and that game will forever be up there with my favourites.