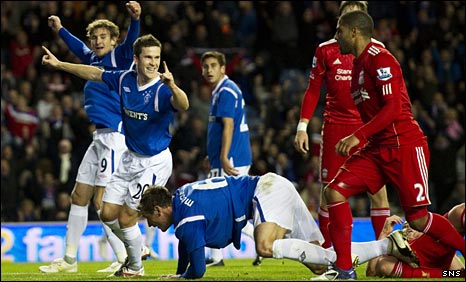 The friendly with Rangers on Tuesday night ended in a 1-0 loss for Liverpool. Kenny Dalglish's side just couldn't find the back of the net in the match at Ibrox.

Liverpool didn't go easy on Rangers and players such as Charlie Adam, Andy Carroll and Glen Johnson were just some utilised by the manager.

Lee McCulloch scored for the home side in the first half which secured Rangers the win by 90 minutes. Doni who let the goal in was the only injured party for Liverpool after he suffered a dislocated finger, but the goalkeeper managed to get some good game time in and this will surely be valuable for a player who has to face facts that Reina will long be the first choice.

In other news, Liverpool are close to reaching a deal with Uruguayan club Nacional. The deal would mean Liverpool could have first pickings on the clubs young players that come up through the academy.

I personally think this is a fantastic move, we know Suarez and Coates both came up through the Nacional ranks and what's to say their isn't more talent hiding in their academy?

Uruguay is a footballing nation and I'd describe the Uruguayan footballers as an untapped resource. Many football fans have known Diego Forlan for a good while but now that Suarez has burst onto the scene in the Premier League, people are standing up and taking notice of the South Americans.
Friendly Liverpool FC Luis Suarez Rangers Sebastian Coates Uruguay
Follow @lfckirstylfc
FcTables.com
FcTables.com